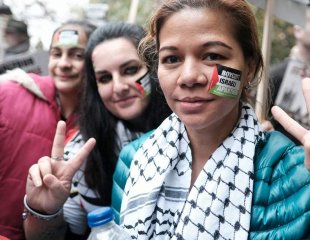 Activists for Equity and Justice Barred from Entering Israel

As an American Jew, strongly for peace, equity and justice, critical of Israeli ruthlessness, a cultural BDS member for years, I'm persona non grata in Israel - barred from entering the country, including the Occupied Territories.

I've never been to Israel, have no intention of going - virtually certain to face harsh humiliating treatment at Ben Gurion airport before being deported for supporting Palestinian rights.

Rebecca Vilkomerson is married to an Israeli. She lived in Tel Aviv for three years. She's an Israeli citizen - barred from returning to the country because of her BDS activism.

It applies to anyone Israel targets "who knowingly issues a public call for boycotting Israel that, given the content of the call and the circumstances in which it was issued, has a reasonable possibility of leading to the imposition of a boycott - if the issuer was aware of this possibility."

The law applies to the state of Israel, its institutions and "area(s) under its control, including the Occupied Territories and Golan.

Prohibiting entry into the country was a provision of the 1952 Entry Into Israel Law, giving the interior minister discretion to decide who's banned from the country.

The amendment to earlier legislation toughened it. Individuals at risk of deportation are treated harshly, subject to grueling interrogations, searches and detention for hours or longer.

Earlier she served as executive director for the National Lawyers Guild. She currently chairs the Center For Constitutional Rights' (CCR) board.

Franke and Warren traveled to Israel, heading a delegation of 15 human rights activists, wanting to tour Israel and the West Bank.

On April 29, they arrived on at Ben Gurion airport, likely not expecting the grueling ordeal awaiting them, unacceptable for anyone, notably for prominent human rights champions like them.

They were detained for 14 hours, harshly interrogated, barred from entering Israel and deported. The group called itself mostly "black and brown civil and human rights leaders working on domestic US justice issues who have not had an opportunity to visit Palestine and Israel."

Warren tweeted along with a photo of himself and Franke in front of an airport "Welcome" sign: "Don't let the 'Welcome' sign fool you, it doesn't apply to #humanrights."

"Center for Constitutional Rights Executive Director and Board Chair Both Denied Entry into Israel" - added testimony to its viciousness.

Separately, Warren said "(t)he Israeli government denied us entry, apparently because it feared letting in people who might challenge its policies. This is something that we should neither accept nor condone from a country that calls itself a democracy."

"Our trip sought to explore the intersection of Black and Brown people's experiences in the US with the situation of Palestinians, and Israel could not have made that connection clearer."

Franke said her "interrogation in Tel Aviv made it clear that (she) was banned from entering Israel because of (her) work in the US on behalf of Palestinian rights," adding:

"No government is immune from criticism for its human rights record. The abusive treatment Vince Warren and I received at Ben Gurion airport ironically illustrates how the state of Israel refuses to respect the political and civil rights of its own citizens, of Palestinians, and of human rights defenders globally."

Palestinians have been ruthlessly treated throughout the Jewish state's existence - a fantasy democracy, never the real thing from inception.