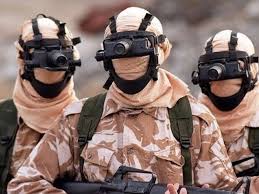 Should it surprise? It's more surprising where US special forces don't operate than where they're sent.

They're deployed in over two-thirds of the world's countries on every continent, not sent as goodwill ambassadors.

They're involved in covert commando operations worldwide as part of Washington's Global War OF Terror (GWOT), not on it,  as falsely claimed.

Launched by Bush/Cheney in October 2001, it's part of America's permanent war on humanity - tens of thousands of special forces involved, notably in the Middle East, Central and East Asia, along with much of Africa.

They're waging covert wars on the phony pretext of combating terrorism Washington created and supports. Their operations get scant media attention, a "grey zone" between war and peace, including in US war theaters.

"In just the past few years, we have witnessed a varied and evolving threat environment consisting of: the emergence of a militarily expansionist China; an increasingly unpredictable North Korea; a revanchist Russia threatening our interests in both Europe and Asia; and an Iran which continues to expand its influence across the Middle East, fueling the Sunni-Shia conflict," adding:

"Nonstate actors further confuse this landscape by employing terrorist, criminal, and insurgent networks that erode governance in all but the strongest states."

In February testimony before House Armed Service Committee members, Thomas lied saying US special forces "played an integral role as part of the Joint Force to the defeat the physical caliphate of the Islamic State of Iraq and Syria (ISIS)."

He lied claiming they're "confront(ing) ISIS and al-Qaeda wherever they (seek) sanctuary."

He lied saying "US prosperity and security is confronted by strategic competition by the 'revisionist powers' of China and Russia, and 'rogue regimes' such as North Korea and Iran which destabilize regions by pursuing weapons of mass destruction - nuclear, chemical, and biological - or by sponsoring terrorism."

No nations anywhere threaten US "prosperity and security." America threatens all nations unwilling to bow to its will.

Special Operations are involved in Washington's drive for global hegemony. Their missions are largely classified, including intelligence gathering on the ground, drone strikes, commando raids, assassinations, and other disruptive activities.

All of the above have nothing to do with combating ISIS and other terrorists, as Washington claims, their fighters used as imperial foot soldiers - proxies doing Washington's killing and dying for it.

Washington's GWOT constitutes a major threat to world peace and stability, allied with other NATO countries, Israel, the Saudis, and other nations - part of America's grand scheme for unchallenged world dominance, all sovereign independent governments targeted for regime change by wars or color revolutions.

GOP and undemocratic Dem administrations wage undeclared naked aggression against one nation after another, along with covert special forces operations worldwide.

It's all about advancing America's imperium at the expense of world peace, stability, perhaps eventual nuclear war, threatening humanity's survival if ever launched.