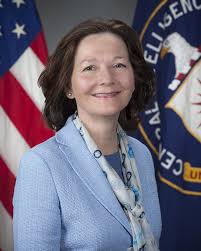 Confirmation of Gina Haspel as CIA Director in Doubt

Post-9/11, she was instrumental in launching global black site torture prisons. Reportedly she was involved in destroying incriminating videotapes, showing torture at the facility she ran along with others.

She remains unaccountable for high crimes too grave to ignore, promoted instead, nominated by Trump to head Langley.

Torture is illegal at all times, under all circumstances, with no allowed exceptions. Washington makes its own rules, international, constitutional and US statute laws discarded with impunity.

Reportedly Haspel wanted her name withdrawn to avoid embarrassing Senate confirmation hearing testimony - certain to include questions about her involvement in the CIA's torture program.

According to the neocon/Langley house organ Washington Post, "Haspel told the White House she was interested in stepping aside if it avoided the spectacle of a brutal confirmation hearing on Wednesday and potential damage to the CIA's reputation and her own."

On Friday, she met with administration officials at the White House. Trump reportedly wants to stick with her.

Her Senate Intelligence Committee confirmation hearing is scheduled for Wednesday. Much can change between now and then.

On Sunday, CBS News reported that her nomination "is going forward," according to an unnamed administration official.

She's the first woman nominated to head the agency. It sent Congress a declassified memorandum, clearing her of any wrongdoing in destroying videotapes of harsh interrogations amounting to torture.

On Saturday, White House press secretary Sarah Sanders indefensibly defended her, saying there's no one "more qualified to be the first woman to lead the CIA than" Haspel.

The late Chalmers Johnson understood how the agency operates from firsthand experience - earlier serving as a consultant to its Office of National Estimates (ONE).

It operates extrajudicially, he said, uncontrolled by checks and balances. Its most sinister mission involves "perform(ing) functions and duties related to intelligence affecting the national security as the National Security Council may direct."

Operating unaccountably worldwide, it's involved in toppling  democratically elected governments, assassinating heads of state and key officials, propping up friendly despots, and continuing the agency's torture program without admitting it.

Johnson said its "unchecked power (and existence) "shorten the life of the American republic."

Haspel was the agency's torturer-in-chief, her confirmation by no means certain. It could still be withdrawn at the 11th hour.

Her deplorable record can't be erased or papered over. She symbolizes a rogue agency incompatible with what free societies cherish.

Assange Verdict: Vengeance Is Ours, Saith the Agency

Why Are SO MANY Pedophiles Hired by the CIA? | Louder With Crowder