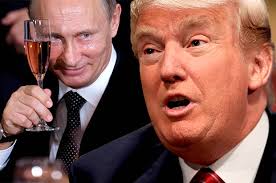 He failed to achieve conflict resolution in Syria for lack of maximum effort to defeat the scourge of US-supported terrorists.

He let Turkey and Washington seize much of northern Syrian territory, was a bystander to the April 2017 US aggression against Syria's Shayrat airbase - based on a CW false flag Big Lie.

Again last month, he did nothing to challenge US/UK/French aggression based on another false flag CW incident.

Throughout over seven years of war, he failed to supply Syria with sophisticated Russian air defense systems to defend the country effectively against US-led NATO and Israeli aggression - things heading toward all-out war if they're not forcefully challenged.

He continues relying on ineffective diplomacy with America achieving nothing positive. Appeasement is defeatist.

Challenging a hegemon bent on world conquest and dominance demands forceful action, the only language it understands, the only effective strategy.

His Syria strategy is minimalist, combating ISIS and al-Nusra terrorists (not others) with a minimal force.

It's inadequate to triumph over US-led aggression. He relocated thousands of terrorist fighters to other parts of the country instead of smashing them decisively, permitting endless war to continue with no prospect for resolution.

He treats Trump, other Western leaders and Israel's Netanyahu as partners. Washington treats him as a mortal enemy.

On Monday, he begins another six-year term amidst pomp and ceremony in the Grand Kremlin Palace's Andreyevsky Hall.

His inaugural oath requires defending the country against foreign enemies - none more menacing than America, none more bent on regime change, none more determined to transform Russia into another US vassal state, wanting its resources looted, its people exploited, the nation balkanized for easier control.

The future of Russian sovereign independence perhaps depends more on his policies ahead than in previous terms.

Neocons infesting Washington represent his greatest challenge - administration ones hardened with the addition of Bolton and Pompeo. They're unrelenting, waging political, economic and propaganda war on Russia.

Is something more sinister ahead? Is direct confrontation coming? Increased US hostility toward the Russia seems certain.

Diplomatic outreach to Washington and its partners won't be any more effective ahead than earlier.

Is Putin up to the challenge to be more forceful in confronting Western hostility than in his first three terms?

Russia's future and fundamental rights of its people hang in the balance.

Why Russia Must Be Demonized