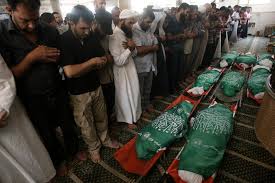 Mass Murder in Gaza Accompanies Opening of US Jerusalem Embassy

May 14, 2018 is a day that will live in infamy in Occupied Palestine - like so many others preceding it!

Israeli state terror on peacefully protesting Gazans continues - the toll horrendous at 3:00 PM local time, sure to rise before day's end, with more of the same coming Tuesday.

An Israeli terror-bombing incident on Gaza was reported near Jabaliya. It's unclear if there were casualties.

While US and other invited guests, along with Israeli officials, mingle ahead of ceremonies marking the opening of Washington's Jerusalem embassy, Israeli forces are lethally shooting peaceful Gazan protesters, injuring hundreds of others.

Numbers could be much higher by day's end - followed by a possible Tuesday bloodbath.

Since March 30, Israeli forces murdered nearly 75 Gazans in cold blood - the international community doing nothing to stop the carnage, continuing with no end of it in sight.

More on what's going on today and ahead in follow-up reports.