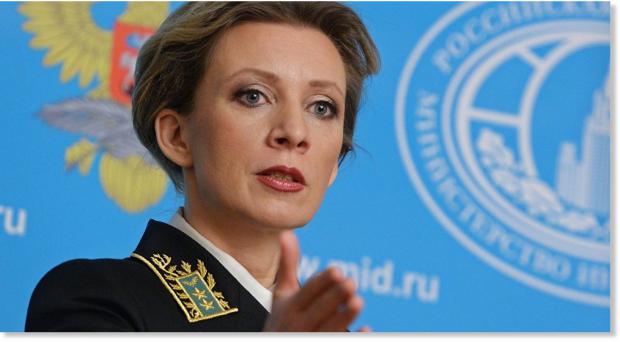 While government forces liberated areas from US-controlled terrorists, conflict resolution remains out of reach because Washington and its imperial partners want endless war and regime change.

Some good news: "About 65,000 previously evacuated residents have returned to their homes in Eastern Ghouta," MZ explained.

Washington intends staying in Syria indefinitely - despite Trump promising to leave "very soon." Virtually nothing he says is credible.

The pro-Western OPCW has yet to report on the false flag Douma incident - long after it took soil samples to test for toxic agents, along with other on-site investigative activities.

MZ was overly optimistic, saying "(w)e expect that (its) investigation will result in detailed and professionally verified findings, which will help restore the actual events in Douma on April 7 and confirm the inconsistency of any far-fetched and unproven allegations against Damascus, which were used as a pretext for the illegal military action by the United States, Britain and France in gross violation of the UN Charter."

"We reaffirm the right of the Palestinians to peaceful protest and condemn the use of armed force against civilians. We urge all parties to show restraint and avoid taking steps that will heighten tensions."

She failed to explain that Gazans demonstrated peacefully, their fundamental right, posing no threat to Israeli security.

IDF forces massacred them in cold blood, injuring around 12,000, many disabled for life - the actions of a ruthless rogue state, knowing it remains unaccountable no matter how heinous its high crimes.

Israel never exercises "restraint" with Palestinians, brutalizing them viciously, Gazans harmed most of all - held hostage in toxic hell under horrendous conditions no one can tolerate.

The world community, including Russia, fails to hold Israel accountable for the highest of high crimes too ruthless to ignore.

MZ addressed "the outrageous treatment by Ukrainian (putschists) of Russian media and journalists from other countries, including Ukraine."

Russia's Foreign Ministry condemned the Ukrainian security services raid on its Rossiya Segodnya media operation in the country, arresting its editor-in-chief, detaining him on fabricated charges.

MZ: "(J)ournalism in Ukraine is going through a real crisis. Local authorities persist in their efforts to suppress any dissent and restrain the freedom of expression whenever it comes into conflict with Ukraine's official line."

"Attacks and intimidation have become a prevalent attitude toward the journalist community."

"Political murders of media workers have become a norm, and any opinions, statements or comments that differ from the official line or nationalist rhetoric are cut short and followed by repressive action."

Media freedom in the country is banned. Yet Washington and its Western partners support what demands denunciation - encouraging censorship instead of opposing it.

Western officials and media are silent, saying nothing about Kiev's war on media freedom. Russia's "Foreign Ministry is appalled at the blatant violation of the rights of journalists in Ukraine," said MZ