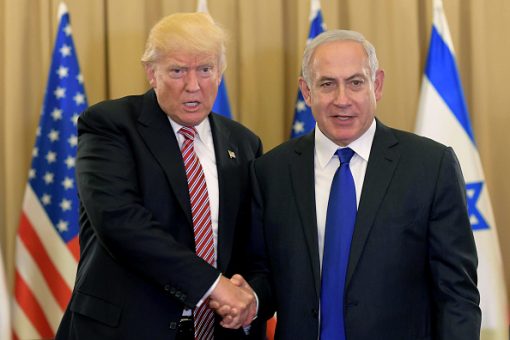 Both countries comprise world history's most ruthless/longstanding axis of evil, partnering in Nuremberg-level high crimes for decades - no end of it in prospect, perhaps the worst to come.

Israeli propaganda reinvented Great March of Return Gazan protests, massacring around 110 Palestinians, more deaths to follow from wounds too severe to overcome, along with around 12,000 injured since March 30, many victims disabled - accountability not forthcoming for high crimes to grave to ignore.

According to Israeli propaganda, reported by supportive Hebrew-language and some Western media, the IDF acted in self-defense, trying to prevent a Hamas-engineered Palestinian invasion, adding dozens of individuals lethally shot were terrorists.

All of the above are bald-faced lies - a failed attempt to absolve Israel of high crimes!

Israel's Hadashot TV turned truth on its head, claiming Hamas orchestrated violent clashes with IDF soldiers, instructing Gazans to bring knives or handguns to demonstrations for use after breaching the border fence and invading Israel, adding:

Israeli Col. Kobi Heller was quoted, saying "(y)ou had thousands of riled up protesters. Someone riled them up. Someone got them to get up as one and charge at the soldiers along the fence," adding:

"If they hadn't charged like that, our soldiers wouldn't have done anything."

An IDF tweet said Hamas "tools for infiltrating Israel (include) children, and disabled civilians rope tied to (the) fence."

Disinformation and Big Lies repeated enough get most people to believe them. Weeks of Great March of Return demonstrations were peaceful.

No one came armed with weapons of any kind, according to Palestinian Center for Human Rights' fieldworkers, observing weeks of Israeli-instigated violence.

Peaceful Palestinians were gunned down in cold blood, including women and children - threatening no one.

There were no burning tires near him, he said, "no smoke, no tear gas, nobody messing around in front of the buffer zone. Just a clearly marked medical team well away from everybody else."

A previous article quoted retired Israeli General Zvika Fogel, saying any Palestinian (adult, youth or child, male or female) "who gets close to the (Gaza border) fence, anyone who could be a future threat to the border of the State of Israel and its residents, should bear a price for that violation," adding:

A "child or anyone else (can) hide an explosive device or check if there are any dead zones…or cut the fence" to enter Israel. The penalty for trying is "death."

Israel misportrayed weeks of peaceful protests as an "armed conflict between the Hamas terrorist organization and Israel" - another bald-faced lie, wanting IDF ruthlessness justified as self-defense.

Nothing justifies Israeli violence against defenseless Palestinians threatening no one, occurring daily throughout the Territories, the world community doing nothing to hold Israel accountable for its high crimes.

According to unnamed sources, the Trump administration intends announcing its no-peace/peace plan next month.

Zionist ideologue/Trump's special representative for international negotiations Jason Greenblatt said he "ha(s) a message to all our friends in the region - Israelis, Palestinians, Arabs, Muslims, Christians and Jews, and also to many others around the world, who regularly contact me to offer their support for @potus and our administration and our efforts to reach a peace agreement. The time has come to open a new chapter."

US allies are being briefed on its provisions. The plan is dead long before arriving. Washington and Israel deplore peace.

They reject Palestinian self-determination, other than perhaps in isolated cantons on worthless scrubland.

Washington's global war on terror and Israeli/Palestinian peace plans when introduced are the greatest hoaxes in modern times.

Whatever Trump announces will one-sidedly favor Israel at the expense of fundamental Palestinians rights.