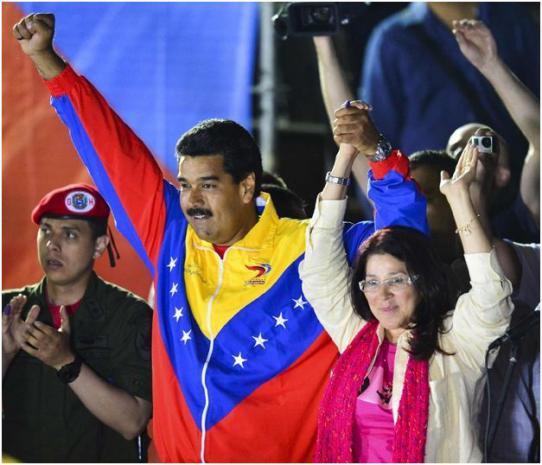 His main adversary, Chavista turncoat Henri Falcon, fared much poorer than predicted with around 21% of the vote.

Businessman/evangelical pastor linked to the Panama Papers tax haven scandal got only about 11% support.

Addressing a late Sunday night crowd of supporters, Maduro hailed his triumph as a victory over "imperialism," saying:

"It has been a heroic, beautiful, popular victory forged in the struggle. I'm the president of all of the Venezuelans. I call for a dialogue process. Permanent dialogue is what Venezuela needs. The revolution is here to stay!"

"I do not have any doubt about the voting process It is an advanced automatic voting system. I come here to keep the peace, coordinate and promote dialogue to improve the democratic mechanism here," adding:

"What I need to do here is to see whether people can cast their ballots at their own discretion. Now we all see how people vote, don't we?"

Other international observers called Sunday's vote open, free and fair, the atmosphere calm, no incidents reported, no irregularities other than minor ones corrected.

The Trump administration rejects the result of Venezuela's election, Deputy Secretary of State John Sullivan told reporters, adding sanctions on the country's oil industry may be imposed, saying "(t)hey are under active review."

Parties boycotting last December's municipal elections had to re-register with electoral authorities. Eligibility required them to collect signatures from 0.5 percent of the electorate in 12 states.

In late January, Venezuela's Supreme Court ruled against the MUD coalition running a joint ticket - for "double affiliation," holding membership in two parties at the same time, the court explaining:

"In the Bolivarian Republic of Venezuela, one cannot be a member of two political parties at the same time, because the interests of one and the other could coincide in some aspects, but there will always be distinctions, which make this unethical and inoperative."

Founder and former editor of Venezuela Analysis Greg Wilpert called MUD's pullout "puzzling," saying given dire economic conditions (largely from US political and economic war), this year's election was "the best opportunity since 1998 that the opposition ha(d) to defeat the Bolivarian Revolution."

Why didn't MUD participate? Wilpert believes it wanted more than just winning the presidency. "(I)t wants a radical break from the Bolivarian Revolution, and the only way it can do that is to provoke a political and economic crisis that would lead to a coup or some other form of radical regime change."

Multiple coup attempts to replace Bolivarian social democracy with fascist tyranny failed - in 2002, a late 2002/2003 general strike/management-led oil lockout, a  2004 recall referendum, months of likely CIA-orchestrated street violence to unseat Maduro, a 2014 plot against him, a 2005 plot to kill him, a 2017 helicopter attack on Venezuela's Supreme Court and Justice Ministry, and a 2017 terrorist attack on Fort Paramacay in Carbobo state two days after Venezuela's Constituent Assembly was inaugurated last August.

Whether Maduro and Bolivarian social democracy can survive the onslaught remains very much uncertain.