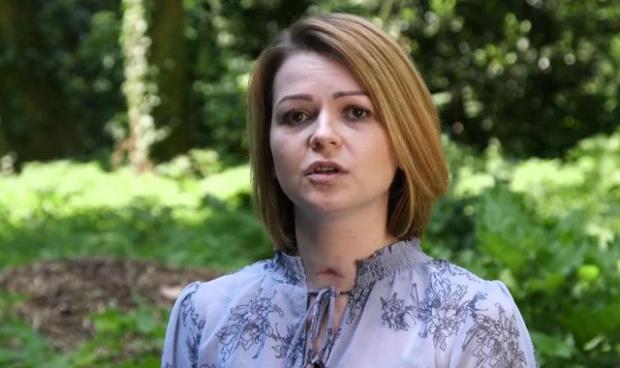 Sergey and Yulia recovered enough from whatever harmed them to be released from hospitalization - clearly not a Novichok military-grade nerve agent as falsely claimed - able to cause death in minutes.

Their whereabouts is unknown. They're denied contact with Russia's embassy. Nor are they permitted free movement or contact with relatives back home.

They're virtual UK hostages, Washington surely complicit in what's been going on since the March 4 incident occurred - the Kremlin falsely blamed for what it had nothing to do with. No evidence suggests otherwise.

"According to Reuters, Yulia Skripal spoke to journalists in Russian at an unidentified location and then submitted her handwritten translation in the English language declining to answer questions."

Here's what she said translated into English:

"I came to the UK on the 3rd of March to visit my father, something I have done regularly in the past. After 20 days in a coma, I woke to the news that we had both been poisoned."

"We are so lucky to have both survived this attempted assassination. The fact that a nerve agent was used to do this is shocking."

"I was discharged from hospital on the 9th of April and continue to progress with treatment but my life has been turned upside down as I try to come to terms with the devastating changes thrust upon me both physically and emotionally."

"I still find it difficult to come to terms with the fact that both of us were attacked. We are so lucky to have both survived this attempted assassination."

"Our recovery has been slow and extremely painful. The fact that a nerve agent was used to do this is shocking. I don't want to describe the details but the clinical treatment was invasive, painful and depressing."

"I take one day at a time and want to help care for my dad till his full recovery. In the longer term I hope to return home to my country."

"I wish to address a couple of issues directly and have chosen to interrupt my rehabilitation to make this short statement."

"I ask that everyone respects the privacy of me and my father. We need time to recover and come to terms with everything that has happened."

She's "grateful for the offers of assistance from the Russian Embassy but at the moment I do not wish to avail myself of their services."

Yulia, and perhaps Sergey ahead, are only allowed to publicly say what UK authorities permit - Britain scripting her remarks, letting her say only what her captors permit.

According to former UK ambassador, human rights activist Craig Murray, Yulia's comment about "not wish(ing) to avail myself of (Russian embassy) services" mistranslated what she said.

Clearly she recited UK-scripted remarks, Reuters complicit in the deception. Yulia is a Russian national, visiting Britain only to see her father.

Except for a brief April 5 scripted-sounding phone conversation with her cousin Viktoria back home, on a temporary phone given her, not her own cell phone, she's not permitted to have, she and her father Sergey have been held incommunicado - currently at an unknown location, denied phone and computer contact with their relatives in Russia.

In response to her scripted remarks, Russia's embassy said "(w)e are glad to have seen Yulia Skripal alive and well. However, the video shown only strengthens our concerns as to the conditions in which she is being held," adding:

"The UK is obliged to give us the opportunity to speak to Yulia directly in order to make sure that she is not held against her own will and is not speaking under pressure. So far, we have every reason to suspect the opposite."

"Judging by quite a few elements, the text was a translation from English and had been initially written by a native English-speaker (translated into Russia for Yulia to read). The handwritten letters signed by Yulia in Russian and English confirm this impression."

"We'd like Yulia Skripal to know that not a single day passed without the Foreign Ministry, Russia's Embassy in London trying to reach her with the main purpose to make sure she was not held against her will, she was not impersonated by somebody else, to get the first-hand information about her and her father's condition."

Sergey and Yulia Skripal are unwitting pawns in a dirty US/UK geopolitical plot to demonize Russia.

They're virtual UK hostages, Britain likely together with Washington responsible for their illness and captivity - harmed and held virtual prisoners, pawns in a US/UK propaganda war on Russia.

They only know what they were told. They'll likely never be permitted to speak openly or travel outside Britain freely.

Nor will they be allowed to return to Russia if they wish. They're virtual prisoners of a hostile power, fully responsible for what happened to them.

UK: Vaxxed Dying at a 6-Times Higher Rate than Unvaxxed; US Vaxxed have 18% Higher Death Rate

A royally good effort! Man who's gone viral with 'spot on' imitation of the Queen's

Will Prince Charles Wage War On Mankind As King?

No 10 concerned as 4.5 million eligible people fail to get Covid jab boosters