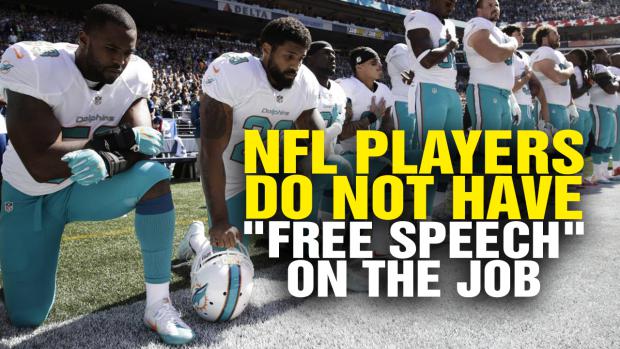 America's First Amendment prohibits Congress from passing laws suppressing speech, press and religious freedoms - along with the right to peacefully assemble and petition government for redress of grievances.

Near-unanimously banning these practices, excluding the ruling from collective bargaining, San Francisco 49ers owner abstaining, subjects teams to fines if players or other personnel fail to show respect for what deserves none.

Along with its flag, the national anthem represents an imperial state, waging permanent war on humanity at home and abroad, responsible for countless millions of casualties post-9/11 alone.

Dissent is the highest form of patriotism. Last September, Trump disgraced himself by irresponsibly blasting NFL players - kneeling, not standing, during the national anthem, their legitimate right of dissent, and why not. There's plenty to dissent about America's rogue state policies at home and abroad.

NFL players and everyone else have a constitutional right to protest peacefully against racial discrimination, police brutality, wars of aggression, social injustice or anything else.

Not according to Trump, roaring at the time "(w)ouldn't you love to see one of these NFL owners, when somebody disrespects our flag, to say, 'Get that son of a bitch off the field right now. Out! He's fired. He's fired!' "

During US 1899 - 1902 aggression on the Philippines, Mark Twain criticized America's flag, saying:

"I am an anti-imperialist. I am opposed to having the eagle put its talons on any other land," harshly blasting ruthless US mass slaughter and destruction.

It's far worse today than then, including dismissiveness toward the nation's most vulnerable, and repression of targeted dissidents, opposing Washington's debauched system, its anti-democratic agenda, its contempt for rule of law principles, its governance of, by and for the nation's privileged class exclusively.

The newly adopted NFL rule illegally bans the right to legitimately protest injustice by refusing to stand on-field during the national anthem - players, coaches and other staff wishing to protest given the option to remain off-field while it's played.

"We want people to stand. That's all personnel, and make sure they treat this moment in a respectful fashion. That's something we think we owe. But we were also very sensitive to give players choices."

Their choice is to protest publicly as the Constitution allows, not privately in locker rooms or elsewhere out of sight and mind.

Cleveland Browns quarterback Tyrod Taylor issued a statement, saying "(t)o make a decision that strong, you would hope that the players have input on it. But obviously not. So we have to deal with it as players, for good or a bad thing."

In response to the ruling, Players Association director DeMaurice Smith tweeted: "History has taught us that both patriotism and protest are like water; if the force is strong enough it cannot be suppressed. Today, the CEOs of the NFL created a rule that people who hate autocracies should reject."

A second tweet said: "Management has chosen to quash the same freedom of speech that protects someone who wants to salute the flag in an effort to prevent someone who does not wish to do so."

"The sad irony of this rule is that anyone who wants to express their patriotism is subject to the whim of a person who calls himself an 'Owner.' I know that not all of the NFL CEOs are for this, and I know that true American patriots are not cheering today."

In Palko v. Connecticut (1937), the Supreme Court called "(f)reedom of thought the matrix, the indispensable condition, of nearly every other form of freedom."

In Texas v. Johnson (1989), Justice William Brennan, writing for the majority, said "if there is a bedrock principle underlying the First Amendment, it is that government may not prohibit the expression of an idea simply because society finds the idea offensive or disagreeable."

According to the High Court ruling, the right to peaceful protests includes public flag-burning - a far stronger action than kneeling or sitting during the national anthem.

Thomas Jefferson once said (f)ree speech and other fundamental rights "cannot be limited without being lost."

Former Supreme Court Justice Thurgood Marshall stressed "(a)bove all else, the First Amendment means that government has no power to restrict expression (regardless of its) ideas…subject matter (or) content."

"Our people are guaranteed the right to express any thought, free from government censorship," along with having all other constitutional protections - eroding toward disappearing altogether.

The NFL Players Association should contest the new rule, suing for the right of constitutionally protected free expression - no matter how politically or otherwise offensive.

Loss of this most fundamental of all rights jeopardizes all others!

The Matrix is Winning

The Execution Of Americans' Free Speech