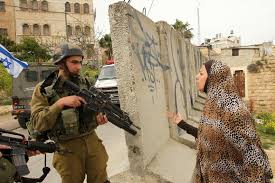 The self-styled "world's most moral army" is one of the most ruthless. Decades of hard evidence proves it.

After massacring Gazans during peaceful Great March of Return demonstrations since March 30, injuring over 13,000 others, many seriously, proposed Knesset legislation bans photographing or otherwise documenting IDF high crimes of war, against humanity, and other human rights abuses if enacted into law.

"Anyone who shoots a video or a photo, or records soldiers while they are doing their job, with the aim of disturbing the morale of soldiers and citizens, will be sentenced to five years imprisonment."

"In case this is done with the aim of destabilizing the state's security, the perpetrator will be sentenced to ten years imprisonment."

Posting photos, videos, and/or other documentation of IDF criminality online, including through social media, is also banned.

Ziofascist sponsor MK Robert Ilatov turned truth on its head, saying the bill is "in response to harassment by left-wing operatives of Israeli soldiers while dispersing violent demonstrations by Hamas on the Gaza Strip border," adding:

"For many years, the State of Israel has witnessed a worrying phenomenon of documentation of Israeli soldiers. This is done through video, stills, and audio recordings by anti-Israel and pro-Palestinian organizations such as B'Tselem, Machsom Watch Women, Breaking the Silence, and various BDS organizations."

"It's time to put an end to this absurdity. We have a responsibility to provide Israeli soldiers with optimal conditions for carrying out their duties, without having to worry about a leftist or organization who might publish their picture to shame and disgrace them."

The measure has nothing to with what Ilatov claimed - everything to do with suppressing IDF high crimes, notably against defenseless Palestinians, especially long-suffering besieged Gazans - posing no threat to Israeli soldiers or civilians, demonstrating peacefully for weeks, not violently.

It wants nothing interfering in how it brutalizes Palestinians with impunity - no documented evidence of its criminality.

Tactics include targeted or mass killings, collective punishment, mass arrests, imprisonments and torture, land theft, ethnic cleansing, along with high crimes of war, against humanity, and slow-motion genocide - because Palestinians want to live free on their own land, in their own country, occupation harshness ended.

In response to the proposed bill, the Palestinian Journalist Syndicate (PCJ) released a statement, calling the measure flagrantly "racist…severely attack(ing) the profession of the press and legitimizes the criminal practices committed by the Israeli occupation army against the Palestinian people," adding:

It "grant(s) legitimacy to the Israeli occupation to commit more crimes," legislating coverup to "escape punishment and international justice."

"The core of the law is to mislead justice and provide a formal cover for further crimes."

The PCJ called on the UN…other international institutions, and human rights groups "concerned with the freedom of press…to express their opinion and exert pressure on the occupying entity to comply with its laws in accordance with international laws and conventions, and to protect the freedom of press work and the role of fundamental journalists in uncovering and documenting the truth."

Israel consistently flouts international laws and its own unaccountably, doing whatever it damn pleases - persecuting Palestinians brutally, attacking its neighbors, with bipartisan US support.

Washington and Israel partner in each other's high crimes - the world community doing nothing to challenge and end their ruthlessness.