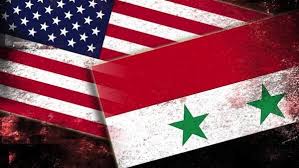 Things seem headed in this direction. Longstanding US policy calls for regime change in Syria and all other sovereign independent countries.

Pompeo through his spokeswoman Nauert demands Russia "compel (Assad) to cease further military offensives" - essential to liberate the country from the scourge of US-supported terrorists and the illegal presence of Pentagon troops in southern and northern areas.

Netanyahu continued, saying his regime is working "against Iran's consolidated military presence against us (a malicious Big Lie), and operating against the transfer of deadly weapons from Syria to Lebanon or their manufacture in Lebanon," adding:

"All of these weapons are for use against the State of Israel and it is our right - based on the right of self-defense - to prevent their manufacture or transfer."

All of the above is rubbish. Israel's only threats are invented ones, no others.

Iran, Syria, Lebanon, and all other nations have the right to produce weapons for self-defense. The US, Israel, and their rogue partners use them for naked aggression - the highest of high crimes.

According to the Saudi broadsheet Asharq Al-Awsat, "Tel Aviv has informed Moscow about its decision to 'expand the scope of its red lines' in Syria (nationwide) by preventing Iran from consolidating its military presence and that of its militias, including Hezbollah, across all Syrian territories, and not just in the south."

If the report is accurate, it indicates Israel will escalate aggression in Syria - likely together with Washington. Both countries partner in each other's high crimes.

They're clearly allied for regime change in Syria, wanting Iran isolated ahead of a similar scheme to topple its government.

Southfront called the Asharq Al-Awsat report more evidence of "a longstanding Saudi-Israeli campaign aimed at undermining the Iranian-Russian cooperation over the Syrian conflict."

Damascus, Moscow, Tehran and Hezbollah are allied in wanting the scourge of US/Israeli/Saudi-supported terrorism in Syria defeated.

Israeli and Saudi propaganda comes ahead of efforts by Syrian forces to liberate territory bordering Jordan, a longtime goal the Trump and Netanyahu regimes aim to prevent.