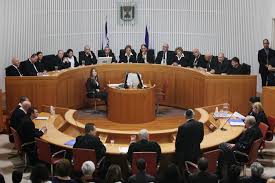 Under international law, ethnic cleansing is a crime against humanity - defined as the forced removal of ethnic or racial groups to benefit others.

In 1992, the UN General Assembly called forced ethnic cleansing "a form of genocide," a war crime under international law.

Genocide includes the forced expulsion of individuals from their land and homes with intent to harm or destroy an ethnic or religious group in whole or in part - longstanding Israeli practice throughout the Territories.

Israel is the world's leading offender, viciously persecuting and forcibly removing Palestinians from their historic homeland since 1948 - a policy ongoing today, an illegal scheme to steal all valued Judea and Samaria territory, including its resources, for exclusive Jewish development and use.

Israeli authorities constantly harass and intimidate residents, wanting them dispossessed of their land, preventing construction to meet their needs, demolishing structures claimed to be built without permit permission virtually impossible to get.

According to the High Court ruling, the Netanyahu regime may ethnically cleanse all community residents, seize their land, as well as destroy their homes and other structures - the court authorizing criminality prohibited under international law.

Palestinian petitions filed with the High Court to retain their homes, other property and land were rejected.

Israeli Justice Noam Sohlberg wrote the High Court ruling - falsely calling "construction in the Khan al-Ahmar compound, both the school and the dwellings…unlawful" - an unjustifiable decision.

Its reasoning is faulty and disgraceful - based on the notion that Palestinians can't live or build on their own land without (impossible to get) Israeli permission.

Sohlberg lied claiming "the area proposed for the families to live on, and the arrangements made for the members of the tribe to carry on shepherding, all indicate that the proposal is not one that makes the state's decision to implement the demolition orders an unreasonable one which justifies judicial intervention."

Transferring them is all about stealing their land for exclusive Jewish development and use. Relocating them elsewhere turns their lives upside down - their land, homes and other property lost to a ruthless occupier.

"The Occupying Power shall not deport or transfer parts of its own civilian population into the territory it occupies" - clearly indicating the illegality of Israeli settlements on stolen Palestinian land.

In response to the High Court ruling, a PA statement said the following:

"Ethnic cleansing is one of the worst forms or racial discrimination, and apartheid. This policy has been the predominant feature that rules the practices and decisions of the Israeli government."

"Israel uses this racist policy to uproot the Palestinians, and illegally occupy their lands to house colonialist settlers."

Israel created the PA under Oslo to serve as its enforcer. For nearly a generation, it betrayed its own people, doing nothing to challenge Israeli ruthlessness beyond hollow statements like the above.

Israel is building an underwater barrier, a sea fence it calls "an impenetrable breakwater" along its border with Gaza - extending dozens of meters below ground, six meters above ground, claiming it's to prevent tunnel construction.

Gaza's blockade since mid-2007 has nothing to do with security, everything to do with falsely calling Hamas a terrorist threat, using the Big Lie as a pretext to suffocate two million Palestinians virtually imprisoned under concentration camp conditions for political reasons alone - holding them hostage to Israeli viciousness.

For 11 years, the world community has done nothing to hold Israel accountable for a high crime too egregious to ignore - nor its mass murder and much more against a defenseless population throughout the Territories.