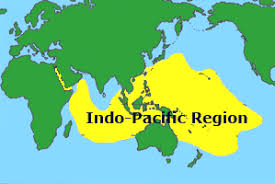 US Pacific Command (PACOM) is now the Pentagon's Indo-Pacific Command, reflecting "connectivity between the Indian and Pacific oceans," according to war secretary James Mattis.

China in the Pacific, Russia in Eurasia, and Iran in the Middle East remain prime US targets for regime change.

War in a part of the world hostile to invaders is possible. Upcoming Trump/Kim Jong-un summit talks offer no assurance of easing tensions - responsibly stepping back from the brink not a US attribute.

Washington demands all nations bend to its will, GW Bush crudely saying: "You're either with us or against us." Neutrality isn't an option.

Neither are fostering world peace and stability, promoting equity and justice, along with respecting rule of law principles and democratic values - anathema notions to Republicans and undemocratic Dems.

On Saturday, Mattis addressed the Shangri-La Dialogue plenary session in Singapore - his remarks aimed at China more hostile than encouraging, stoking tensions instead of responsible outreach to avoid them.

His comments about "a free-and-open Indo-Pacific" reflect US aims for regional dominance. "(M)ake no mistake," Mattis roared.

"America is in the Indo-Pacific to stay. This is our priority theater, our interests, and the regions are inextricably intertwined."

Adding "no one nation can or should dominate the Indo-Pacific" belies Washington's intent to control the region unchallenged - nations unwilling to bend to its will targeted for regime change.

Chinese General He Lei at the plenary session countered Mattis, saying America is the real source of regional tensions and possible conflicts.

People's Liberation Army Col. Zhao Xiaozhuo slammed Washington, saying "(t)he Shangri-La Dialogue has become an occasion for China and the US to engage in fights," adding:

"(I)t was inevitable that China had to hit back at Mattis' accusations. But engaging in a fight does not help to solve the problems."

On North Korea, Mattis demanded what Washington is unlikely to get short of iron-clad security guarantees the DPRK seeks - never assured in dealings with the US.

"Our objective remains the complete, verifiable, and irreversible…denuclearization of the Korean Peninsula," said Mattis - wanting the DPRK to eliminate its key deterrent to feared US aggression, getting nothing in return but empty promises.

At the same time, Mattis stressed "modernizing our alliance with both the Republic of Korea and Japan" - code language for pursuing increased regional militarization under Pentagon control.

"(I)ncreasing economic prosperity" means benefits accruing to US corporate predators at the expense of foreign competitors.

Mattis unfairly slammed China, saying its "policy in the South China Sea stands in stark contrast to the openness of our strategy."

"These islands need to be protected. Therefore deploying defensive weapons is just as logical as planting trees."

With frequent provocations by US warships near Chinese territorial waters "how could there not be even one air-defense or anti-ship missile on the islands?"

"The US has deployed more of its military assets in the South China Sea than those of the other countries in the region."

"And Washington has the temerity to repeatedly accuse Beijing of 'militarizing' the South China Sea. We have seen hypocritical diplomatic rhetoric but none" matches extreme US hubris and arrogance, adding:

"These islands need to be protected. Therefore deploying defensive weapons is just as logical as planting trees. Given the complex geopolitical situation where US warships, including its aircraft carriers, continue to cruise the region, how could there not be even one air-defense or anti-ship missile on the islands?"

"The danger in the South China Sea is caused by the US continuing to increase its military presence in the region, forcing China to naturally upgrade its defensive weapons on the islands. This in turn gives the US more excuses to exert military pressure, causing regional tensions to spiral."

Mattis turned truth on its head, accusing Beijing of "militarization (for) intimidation and coercion" - US policy globally, not China's, cooperating with other nations, not bullying or attacking them.