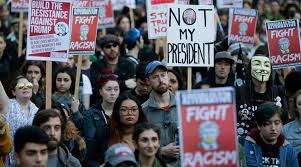 Mass protests against the Trump regime's unlawful agenda toward unwanted aliens are very much warranted and vital. Yet they're way short of what's most needed.

Upholding justice under law for everyone, along with strictly observing the letter and spirit of rule of law principles, are global issues - one above others in America way inadequate, especially when issues more important than others are ignored or get short shrift.

Nothing approaches the importance of challenging Washington's imperial war agenda, smashing one country after another, responsible for countless millions of casualties - responsible parties free to commit high crimes of war and against humanity with impunity.

Where's the mass outrage, including about countless trillions of dollars spent for mass slaughter and destruction, vital homeland needs left begging, including the erosion of important social programs to help pay for naked aggression and global dominance.

Most Americans don't realize how greatly they're harmed by endless US imperial wars.

The spirited Vietnam era anti-war movement greatly helped getting US combat troops out of Southeast Asia - though not easily or quickly.

In 1971 testimony before Congress, a young John Kerry Vietnam veteran explained high crimes committed by US soldiers, including highly decorated ones.

"We saw firsthand how money from American taxes was used for a corrupt dictatorial regime…We rationalized destroying villages…to save them."

"We saw America lose her sense of morality (by accepting) a My Lai" massacre and many others like it. "We learned the meaning of free fire zones, shooting anything that moves, and we watched while America placed a cheapness on the lives of orientals."

Kerry explained the above, later becoming part of the dirty system in Congress and as secretary of state - his morality and soul sold for wealth, power and privilege, atrocities in US war theaters today as horrendous or worse than earlier, suppressed by media scoundrels.

Without it, US Nuremberg-level high crimes continue endlessly, along with police state harshness at home and serving privileged interests exclusively at the expense of fast eroding social justice, heading toward disappearing altogether.

The public spirit of that earlier era is gone, why America gets away with mass murder and much more, why thirdworldizing the country continues, why most people are mindless about growing tyranny posing as democracy, disdained from the nation's inception, today as well under one-party rule with two right wings - hostile to virtually everything just societies hold dear.

During and after the presidential campaign, dark forces in Washington and other centers of power manipulated Americans to turn out in large numbers against him.

It's part of a plot to delegitimize and undermine him, including by falsely claiming Russian US electing meddling helped him triumph over Hillary, a bald-faced lie still resonating.

Unknown numbers were paid to protest earlier. Were weekend crowds assembled the same way to demonstrate against Trump's hostility toward unwanted aliens?

Most Americans are easy marks to manipulate and fool - no matter how many times they were had before. The late Studs Terkel and Gore Vidal both called the nation "the United States of amnesia."

I and others call the US a plutocracy, not a democracy. Since the Soviet Union dissolved in 1991, America became increasing neoliberal, hardline and belligerent - a warrior state more than ever post-9/11.

Trump exceeds the ruthlessness of his predecessors at home and geopolitically - unacceptable hostility toward unwanted aliens one of many illegal and immoral policies.

All are important, some more than others, none more than mass opposition to imperial wars, along with mass activism against police state injustice, harming America's poor and most disadvantaged, and a nation serving privileged interests exclusively.

Where's the outrage against all of the above? Selective indignation, especially if manipulated, not grassroots, doesn't pass the smell test.

It's not how true blue activism operates, too few in numbers domestically, at most a shadow of its long ago peak.