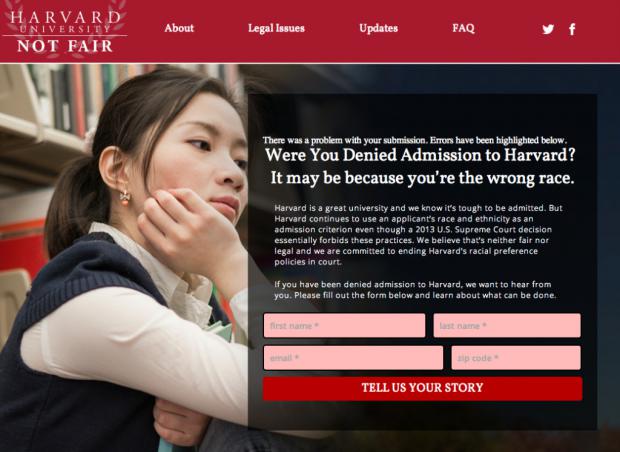 A personal note. I attended Harvard College, receiving a BA degree in 1956.

In March 2017, my alma mater unwittingly honored me by inclusion in its University Library fake guide to "fake news, misinformation and propaganda."

"Fair Harvard," the university's alma mater, lacks fairness. Its motto "VERITAS" on its seal and class rings belies its establishment and admissions practices.

According to the suit, Harvard uses racial "quotas" and "racial balancing" in admitting undergraduates, adding:

The university "uses 'holistic' admissions to disguise the fact that it holds Asian Americans to a far higher standard than other students and essentially forces them to compete against each other for admission."

Since 2000, Asian-Americans had the lowest admission rate of any racial group despite higher test scores.

"We believe that the rest of the evidence will be released in the next few weeks, and it will further confirm that Harvard is in deliberate violation of Title VI of the Civil Rights Act."

In June 2013, the Supreme Court upheld race-conscious admissions at the University of Texas by a 4 -3 ruling.

Elena Kagan recused herself for prior involvement in the case as US Solicitor General.

Writing for the majority in Fisher v. University of Texas, Justice Kennedy claimed "(a) university is in large part defined by those intangible 'qualities which are incapable of objective measurement but which make for greatness,' " adding:

"Considerable deference is owed to a university in defining those intangible characteristics, like student body diversity, that are central to its identity and educational mission."

Treating university applicants (or anyone else) differently based on race, ethnicity and/or religion is clearly discriminatory. Despite the High Court ruling, SFFA plaintiffs continue their pursuit of admissions fairness - despite little likely chance of prevailing following the Supreme Court's ruling, setting a disturbing new millennium precedent.

In the landmark 1954 Brown v. Board of Education unanimous ruling, the Supreme Court upheld the Equal Protection Clause of the 5th and 14th Amendment's, affirming that no state shall deny to anyone under its jurisdiction "equal protection of the laws," including the right to life, liberty and property - along with adherence to international, constitutional and US statute laws.

Brown v. Board of Education is the basis of ruling racial segregation illegal, the same applying to other discriminatory practices based on race, ethnicity or religion.

In 2013, Harvard's Office of Institutional Research (OIR) found that College admissions policies produce "negative effects" for Asian-Americans - along with advantaging legacy students and athletes over their low-income counterparts.

White students ranked higher only in personal qualities, assigned by the Admissions Office.

In Orwell's novel "Animal Farm," some animals were more equal than others - the way it is at Harvard, in America, other Western countries and most elsewhere.

It violates the letter and spirit of human and civil rights laws - yet continues widespread anyway.