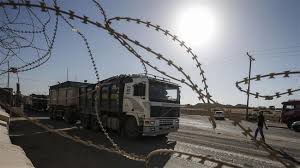 Israeli apartheid ruthlessness is best understood by its enormous harm, willfully and maliciously inflicted on millions of defenseless Palestinians, besieged Gazans most of all.

Held hostage since mid-2007 under appalling conditions, Israel continues trying to suffocate them into submission - a ruthless strategy amounting to slow-motion genocide.

Gazans are entirely cut off from the outside world. Nothing and no one enters or exits the Strip without Israeli permission.

On Wednesday, the Netanyahu regime imposed another ban on gasoline, diesel fuel, and cooking gas from entering Gaza via the main Kerem Shalom commercial crossing, the only one connecting the Strip to Israel - announced by Israeli war minister Avigdor Lieberman, an unindicted Ziofasist war criminal.

A week later, fuel and cooking gas were banned. On July 24 with little remaining, Israel partly reversed the ban - reimposed on Wednesday in response to flaming kites, symbolic Gazan resistance against a ruthless occupier.

Gazans are already suffering enormously from overwhelming unemployment and impoverishment - because of devastating blockade conditions.

Vital services essential to life and well-being are limited or absent. Palestinian resistance is notable, ongoing for decades, not about to yield to hostile Netanyahu threats and actions.

Ahed Tamimi symbolizes Palestine's liberating struggle. Interviewed by RT Arabic days after her release from Israeli gulag hell, she said "I hope nobody ever goes through what I went through," adding:

"But I'm glad I ended up there for my beliefs. And I'm ready to go to prison 100 more times if it serves the good of my country."

"I knew they could arrest me. It's a common practice when your people live under Israeli oppression."

Ahed explained that ruthless treatment she received in prison was "too much to handle." Prison authorities shut down classes she and others attended.

They persevered and "pulled through…(U)nfortunate events united us." Ahed completed her high school curriculum work with help from other prisoners. Their sprit is too strong to break.

Attorney Gaby Lasky represented her in military court. There was no connection between the well-known slapping incident and her unhustifiable sentence.

Lasky said anyone who thought they could break Ahed's spirit with "violence, threats and an inflated prison sentence found out that all of this only strengthened her."

"Where the authorities tried to conceal the occupation and its ramifications, Ahed managed to shine a light on its injustices."

So do countless numbers of other Palestinians, enduring decades of apartheid viciousness, not about to quit until their liberating struggle is won.

Lasky explained that no amount of US and other foreign weapons, "arrested Palestinian minors, or uprooted families will stop the demand by millions of Palestinians for independence, freedom and a life of dignity."