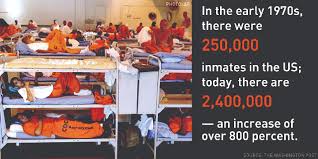 America's gulag prison system is the shame of the nation. The Sentencing Project's director Marc Mauer is a leading expert on US criminal injustice, harming Blacks and Latinos most of all.

In his groundbreaking "Race to Incarcerate" book, Mauer focused on America's obsession with imprisonment, punishment, and the commodification of prisoners to fill beds for profit.

Society's most vulnerable are oppressed, targeted for supporting ethnic justice, racial emancipation, along with political, economic and social equality across gender and color lines.

Mandatory minimum sentences exacerbate the problem. So do other racist policies, including judicial unfairness, three strikes and you're out, get tough on crime policies, and a guilty unless proved innocent mentality.

It's what the Innocence Project earlier called "McJustice, the McDonaldization of criminal justice, the crisis of indigent defense."

Sociologist George Ritzer described what he called the "irrationality of rationality," the "homogenization" of America and other societies.

What's true about US criminal injustice is true as well about its secondary and higher education, the nation's major media, and its militarized and commodified way of life - prioritizing power and profits over public health and welfare.

"The War on Drugs and harsher sentencing policies, including mandatory minimum sentences, fueled a rapid expansion in the nation's prison population beginning in the 1980s."

"The resulting burden on the public sector led to the modern emergence of for-profit private prisons in many states and at the federal level."

The report's key findings include the following:

According to US Bureau of Justice data, 2.2 million individuals are imprisoned in America, including 630,000 in local jails.

One in 12 inmates are in privately run prisons for profit, wanting increasing numbers of beds filled for greater revenues and profitability.

Core Civic and GEO Group run over half of America's private prisons.

"Cost savings claims associated with prison privatization are unfounded according to decades of research."

Former Bureau of Prisons' research director Gerry Gaes explained "(y)ou can squeeze a half a percent out (of private prisons in cost savings at the expense of proper administration), who knows?"

"But it's not as if these systems are overfunded to begin with. And at some point, you start to lose quality. And because quality is very difficult to measure in prisons, I'm just worried that you're getting in a race to the bottom."

Filling prison beds for profit turned incarceration in America into a growth industry because of its rage to incarcerate.

Brutal conditions, dangers, and abuses are commonplace in all prisons. Privately run ones are especially scandalous and extreme because of prioritizing cost-cutting over proper administration and other abuses.

Abuses by guards include denial of proper medical care, beating prisoners, attacking them with dogs, shocking them with stun guns, and other abuses - in public and private prisons, women and juveniles especially vulnerable.

Inmates are treated as commodities, not people, countless thousands unjustly imprisoned - either falsely or for issues too minor to matter, including illicit drug use.