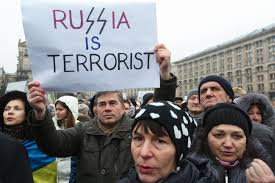 Russophobic undemocratic Dems and likeminded Republicans want Pompeo to decide whether the State Department should designate Russia a state sponsor of terrorism.

The idea is unlikely to gain majority support, but proposing it is another example of how low what passes for governance in Washington has sunk - more evidence of a deeply corrupted political cesspool too debauched to fix.

Fact: America is the world's leading state sponsor of terrorism, waging endless wars on humanity at home and abroad, oppressing its own most disadvantaged citizens, mistreating unwanted aliens like fifth column threats.

Fact: Russia supports world peace and stability, along with mutual cooperation among all nations.

"The moral case for such a designation is sound. Russia has invaded its neighbors Georgia and Ukraine, it supports…Bashar al-Assad and our enemies in Afghanistan, and it is engaged in active information warfare against Western democracies, including meddling in the 2016 United States elections."

All of the above are despicable bald-faced lies, repeated time and again by congressional and media Russophobes.

In April, Gardner introduced legislation, requiring the State Department to compile a report to Congress within 90 days of the bill's enactment to determine whether Russia meets the criteria for designating it a state sponsor of terrorism. Currently Iran, Syria, North Korea and Sudan are falsely labeled this way.

He falsely accused the Kremlin of violent actions it had nothing to do with, while ignoring indisputable US state-sponsored terrorism worldwide - its endless wars of aggression, along with supporting ISIS and likeminded terrorist groups, using them as imperial proxies in Syria, Iraq and elsewhere.

In June, Russophobic Senator Mike Coffman introduced legislation, calling for Russia to be designated as a state sponsor of terror.

It calls for "increas(ing) economic, political, and diplomatic pressure on the Russian Federation in response to Russia's continued interference in our elections, malign influence in Syria, aggression in Crimea, and other activities."

It requires determining whether Russia meets the criteria for designating the country a state sponsor of terrorism.

It calls for imposing tough sanctions on Russian political officials and others for "facilitat(ing) illicit and corrupt activities, directly or indirectly, on behalf of Vladimir Putin."

It imposes "sanctions on transactions related to investment in energy projects supported by Russia state-owned or parastatal entities (as well as on)  transactions relating to new sovereign debt of the Russian Federation."

It prohibits US companies and individuals from "engag(ing) in activities relating to certain projects to produce oil in the Russian Federation."

It falsely accuses Russia of obstructing international efforts to investigate CW attacks, along with wanting the Kremlin punished for CW production and use.

In October 2017, Russia completed the destruction of its entire CW stockpile - verified by OPCW inspectors.

America breached its pledge to eliminate its own CWs, the world's largest stockpile, over 2,500 tons, according to Russian Deputy Foreign Minister Sergey Ryabkov, adding:

What does the US intend to do with its "carefully kept weapons of mass destruction banned for others. It seems they need them for something."

The above measure includes other Russophobic provisions. Its sponsors falsely accused the Kremlin of intending to meddle in November US midterm elections.