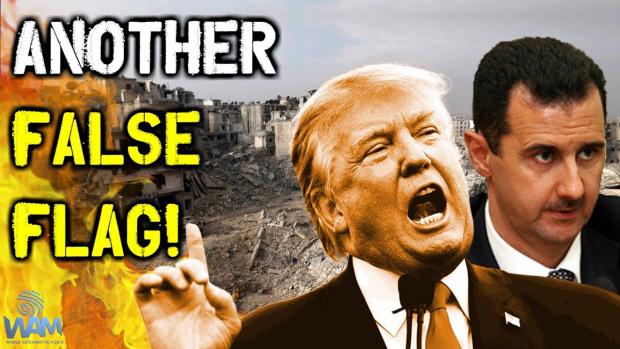 US dirty hands are behind horrific high crimes of war and against humanity in Syria and other war theaters - along with its imperial partners and terrorists they support.

Nothing hostile in Syria and elsewhere happens without US involvement. ISIS, al-Nusra, and other terrorists don't act on their own. Washington orchestrates and/or OK's every significant incident - notably terror-bombing, CW attacks, and other atrocities.

On Tuesday, Syrian UN envoy Bashar al-Jaafari presented documents to the UN about an impending US/UK-orchestrated al-Nusra CW false flag in Idlib province against civilians - government forces to be wrongfully accused of the incident.

Toxic chlorine canisters were delivered to the planned crime scene - to be used on command, followed by US, UK, French terror-bombing of Syrian sites, Russia going all-out to prevent the incident.

"Both in the UN and in The Hague, where the headquarters of the OPCW is located, we submitted concrete facts that were obtained from different (reliable) sources."

"It is necessary to make efforts so that the international organizations feel their responsibility for the provocations being planned and speak up against such attempts."

"We were promised these materials will be studied very carefully. So far, there is no other reaction, but we would like to hope that the technical secretariat will take this seriously and take appropriate steps."

"We plan to issue a special press release in the near future, which will be circulated among the member states of the OPCW executive council."

"We will send it to diplomatic missions that are accredited not only in The Hague, but also in (Brussels). We also plan to hold a meeting with a number of delegations live at the beginning of next week."

"We must do everything possible to prevent this terrible tragedy, which the opponents of Bashar Assad want to use to advance their narrow-minded goals of overthrowing the legitimate authorities."

Moscow maintains the illusion of possible improved relations with Washington - instead of recognizing that differences between both countries are irreconcilable.

Their objectives are world's apart. Nothing in prospect indicates improved relations are possible.

Lavrov hinted at it saying "you know what the atmosphere is like there."

Indeed! Washington is infested with bipartisan unapologetic Russophobes too hardline to change.