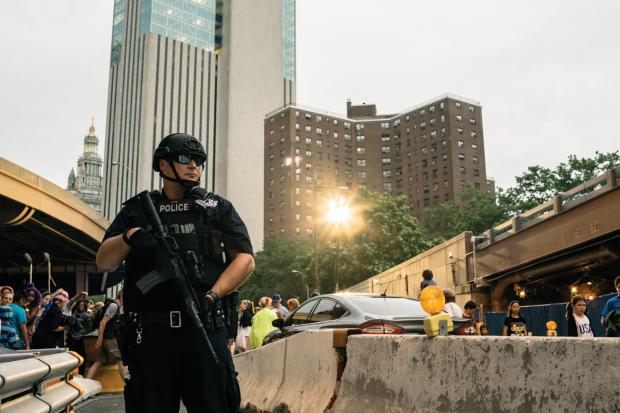 Throughout its history, America was never beautiful, far from it, a fantasy democracy from inception - the nation today on a slippery slope toward full-blown tyranny.

Most people are none the wiser - daily bread and circuses doing their job, manipulating and distracting them from what's most important.

Hollywood, major media television, sporting and other events over-entertain them to divert attention from sinister affairs of state, focused on global conquest, enriching privileged interests more than ever, relegating ordinary people to virtual serfdom, transforming America into the largest, most destructive ever banana republic - with nukes and other super-weapons.

9/11 state-sponsored terrorism unleashed US war on humanity at home and abroad more than ever before.

Terrorists "R" us. So-called "crazed Arabs" and Osama bin Laden had nothing to do with what happened on 9/11, a day that will live in infamy - when US dark forces attacked the nation, blaming their high crime on others uninvolved in what happened.

What's going on is nightmarish at home and abroad, including US war on humanity, police state control, and neoliberal harshness, harming ordinary people everywhere, America made unsafe and unfit to live in, things worse than ever today.

False flags are a US tradition, dating at least from the mid-19th century with the annexation of Texas and half of Mexico - to expand America "from sea to shining sea" by brute force, regardless of the horrific human toll.

9/11 was the mother of all false flags, changing the course of history, staged to let Republicans and undemocratic Dems wage endless wars of aggression against one sovereign independent state after another - a diabolical plot for control of planet earth, its resources and populations, wanting an expanded NATO used as a global police force.

Bin Laden was an unwitting CIA asset, transformed into "Enemy Number One." In December 2001, he died of natural causes in a Pakistani hospital, widely reported at the time - including by The New York Times (several months later), Fox News and the BBC.

Obama didn't kill him, as falsely touted. On July 11, 2002, The New York Times said "Osama bin Laden is dead. (He) died in December and was buried in the mountains of southeast Afghanistan" - confirmed by other media and public figures.

He was seriously ill for months before his natural death. Blaming him for orchestrating 9/11 from a cave in Afghanistan, then a Pakistani hospital was absurd.

Yet the Big Lie persists - in spite of the FBI later admitting it had no evidence linking him to the attack, nor anyone else falsely blamed.

The official 9/11 account was fabricated to conceal state-sponsored terrorism, dark forces in Washington responsible for what happened.

David Ray Griffin is the world's preeminent 9/11 scholar. His 10 books on the mother of all false flags provide the most detailed account of what happened on that fateful day and related events.

They include The New Pearl Harbor, 9/11 Contradictions, 9/11 and American Empire, the 9/11 Commission Report, Debunking 9/11 Debunking, and five others - a remarkable definitive anthology of truth-telling scholarship about what happened on the most historically significant day in US history since December 7, 1941.

It unjustifiably justified what followed - a 17-year nightmare at home and abroad with no end of it in prospect.

Things are worsening, not improving, risking the ultimate nightmarish scenario - possible nuclear war by accident or design, endangering humanity's survival if ever occurs.

Bipartisan lunatics running the Washington asylum make anything possible - even the unthinkable.

Biden Blasts Americans on Eve of 9/11:

The 9/11 Mother of All Scams Until Flu/Covid Arrived