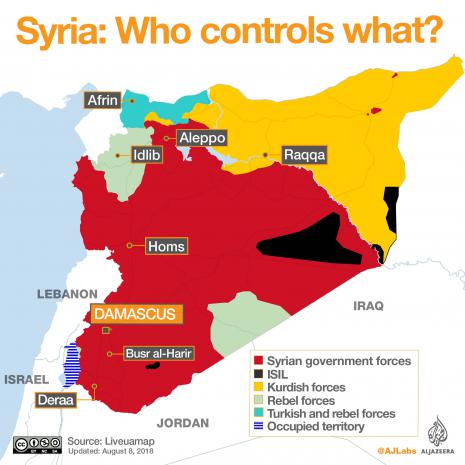 According to Russia's Foreign Ministry, a "whole range of issues relating to the (Syrian conflict) was substantively considered. A firm commitment was confirmed to finally destroy the terrorist presence and make steady progress towards a longterm political settlement in the interests of all Syrians."

Since Friday, the Syrian Arab News Agency (SANA) said scores of civilians "were martyred in three new massacres  committed by the US-led international coalition in the villages of al-Suseh and al-Bubadran in al-Bukmal region in Deir Ezzor southern countryside," adding:

"(T)he death toll is likely to rise as most of the wounded sustained serious injuries and the difficulty of being evacuated from the rubble of  houses destroyed by the airstrikes."

US-led terror-bombing pretends to be combating the scourge of ISIS Washington, NATO, Turkey, Israel, and the Saudis support - including use of CWs and other banned weapons.

On Sunday, SANA said al-Nusra terrorists "transferred a shipment of chlorine and sarin gases from the town of Maaret Masrin to Jisr al-Shughour area in the countryside of Idlib province" the previous day.

Russia expects a CW false flag could occur any time in Idlib - to be wrongfully blamed on Damascus.

over 40,000 sorties were flown since September 30, 2015, evenly divided between daylight and nighttime operations;

around 122,000 terrorist facilities were struck, around 87,500 terrorists eliminated - tens of thousands still active in the country;

over 1,400 settlements were liberated from control by US-supported terrorists;

Idlib province controlled by US-supported al-Nusra and allied jihadists is the last remaining terrorist stronghold in the country.

So-called "moderate" terrorists are just as ruthless as ISIS and other cutthroat jihadists.

According to Shoigu, Russian forces "acquired extensive military experience in Syria, and we are ready to share it," adding:

Special attention is being paid to addressing humanitarian issues and assisting refugees return to their home areas.

They're equipped with advanced radar capability, improved target illumination and guidance, as well as a mobile command post.

They can fire multiple medium-range tactical ballistic missiles, able to strike hostile warplanes and other aerial targets up to 155 miles away.

They have improved anti-jamming capability, permitting effective electronic warfare. Claims by Israel about Iranians operating them are false, only Russian specialists and Syrians they're training in their use.

It's expected to take around 90 days before they're fully able to operate the S-300s on their own.

Ceasefire in Syria Dead on Arrival?