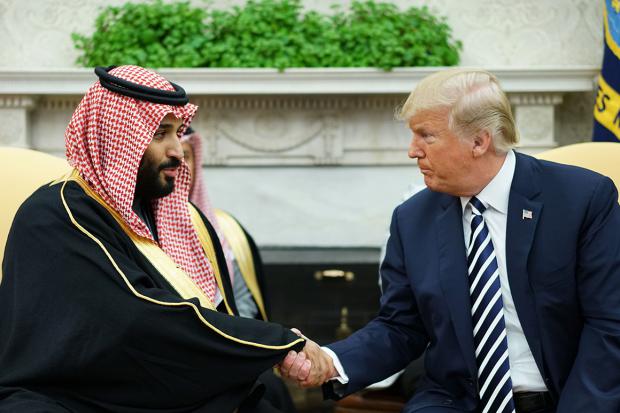 One fascist leader disdainful of world peace, democratic values, and rule of law principles supports another - how Washington always operates on the world stage, by its own rules, no others.

De facto Saudi leader MBS rules with an iron fist. No one dares circumvent his authority on virtually all internal and geopolitical matters.

Anyone daring to operate ad libitum risks ending up like Khashoggi. It's been clear from the day he entered Riyadh's Istanbul consulate and never emerged that MBS ordered his elimination - likely because he might reveal damning dirty secrets about the kingdom in Yemen and perhaps elsewhere regionally.

The Saudis are complicit with Washington's imperial agenda, its wars of aggression in multiple theaters, its support for ISIS and other jihadists, their use of CWs wrongfully blamed on Damascus - the kingdom supplying them with banned toxic agents, using them in Yemen against defenseless civilians.

MBS likely feared Khashoggi might reveal some or all of the above, wanting him silenced. Dead men tell no tales - unable to disclose dirty secrets they know.

On Saturday, Trump said Langley hadn't yet briefed him on its conclusion about MBS' responsibility for murdering Khashoggi, adding:

"Recent reports indicating that the US government has made a final conclusion (about Khashoggi's murder) are inaccurate," adding:

"There remain numerous unanswered questions with respect to the murder of Mr Khashoggi."

"The State Department will continue to seek all relevant facts. In the meantime, we will continue to consult Congress, and work with other nations to hold accountable those involved in the killing of Jamal Khashoggi."

The Trump regime continues going all-out to prevent any change in longstanding US (dirty business as usual) relations with Riyadh - for seven weeks, refusing to admit what's clear to the world community.

MBS ordered Khashoggi's murder, no one else. What happened was well-planned in advance.

Langley concluded that MBS exercises absolute authority, indicating it's inconceivable that an elaborate operation to eliminate Khashoggi could have carried out without his knowledge and authorization, according to sources familiar with the agency's conclusions.

Ahead of the briefing, he said he was told that MBS was uninvolved in Khashoggi's murder - clearly not the case.

He, Pence, and other regime officials said the US will hold Khashoggi's killers accountable - wanting expendable Saudis held responsible, not MBS, ones designated to take the fall for the murder he ordered.

Turkish audio and forensic evidence indicates Khashoggi was murdered straightaway after entering the Istanbul consulate, his body believed dismembered and dissolved in hydrofluoric acid, disposed of down the consulate's drain.

Turkish investigators found traces of the acid, reportedly no evidence of Khashoggi's DNA in the facility.

Trump calling Riyadh "a truly spectacular ally" shows his intention to let nothing stand in the way of unchanged bilateral relations. The same goes for EU and at least most other nations.

EU foreign affairs chief Federica Mogherini laughably said "the kingdom of Saudi Arabia must put in place measures to ensure that something like this can never happen again" - knowing Riyadh commits cold-blooded murder and countless other high crimes repeatedly, internally and abroad.

The neocon/CIA-connected Washington Post said Trump is "look(ing) for ways to avoid pinning the blame on" MBS, according to White House aides, adding:

"(W)ithin the White House, there has been little doubt that (MBS) was behind the killing."

" 'This is a situation where everyone basically knows what happened,' said one adviser who talks to Trump often. This person said Trump has repeatedly criticized how (MBS) handled the situation and has said it is clear they are hiding facts."

After Haspel, Pompeo, and Bolton briefed him aboard Air Force One en route to assess raging fire damage in California, Trump said "(t)hey haven't assessed anything yet. It's too early" - what's clearly untrue.

On Friday, Trump regime National Security Council head of US policy toward Saudi Arabia, Kirsten Fontenrose, resigned - no explanation so far given.

Reportedly she played a key role in deciding what Saudi officials to sanction in response to Khashoggi's murder.

WaPo quoted an advisor close to Trump, saying Khashoggi's murder "is a problem that he wants to go away."

It's astonishing that the assassination of a single individual by any nation for any reason, other than a head of state or other significant figure, would remain a major international issue seven weeks after it occurred.

It's clear that despite the surprising long-lasting international furor, relations between the kingdom and at least most other nations remain unchanged.

Whether MBS stays on as crown prince is unknown. Perhaps replacing him will prove the only way to resolve the issue. The fullness of time will tell.

The Inevitable Outcome Of The Oil Price War