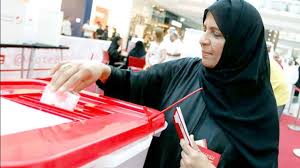 Elections the way they should be held are nonexistent in most countries. In repressive regimes like Bahrain, anointments install officials in office, the process entirely illegitimate.

Regimes throughout most of the Middle East rule with iron-fisted brute force, notably in Saudi Arabia and other Gulf states.

Parliamentary elections on Saturday mocked what a free, fair and open process is all about. Days earlier, Human Rights Watch said so-called Bahraini elections "are occurring in a repressive political environment."

A regime decree bans anyone earlier belonging to a dissolved political organization from running for public office - disqualifying all legitimate opposition figures.

Bahrain is involved with Saud/UAE crimes of war and against humanity in Yemen. The US, UK, France, and other countries continue selling its regime weapons, including what's used for internal repression, its horrendous human rights abuses ignored.

It's occurring in a controlled, repressive, anti-democratic environment - reflecting the deplorable state of things in the country, including over 14,000 political prisoners, victims of arbitrary arrests and brutality since 2011.

Ahead of Saturday voting, activists and members of political parties urged Bahrainis to boycott the farcical process.

SC member selected by king Hamid can block any lower house initiatives. According to Gulf Matters founder Bill Law, most Bahrainis feel "what's the point" of participating in a regime controlled process.

"You simply cannot crush, torture and imprison your entire opposition, call for a pseudo-election, and then demand the respect of the international community."

Majority Shias are brutally persecuted in the Sunni-run country. According to the UN High Commissioner for Human Rights, Bahraini ruling authorities "systematc(ally) harass" Shias, "stripping many them of citizenship," adding:

"(A)rrests, detentions, summons, interrogations and criminal charges brought against numerous Shia religious clerics and singers, human rights defenders, and peaceful dissidents is having a chilling effect on fundamental human rights" in the country.

Fabricated charges are used as a pretext for restricting free expression, assembly, and other fundamental rights.

Digital Dollar And Digital Wallet Bill Surface In The Senate

David Icke - The Truth Behind The Coronavirus Pandemic, COVID-19 Lockdown & The Economic Crash

V FOR VENDETTA - THE SPEECH

Panic Will End but Tyranny Will Not