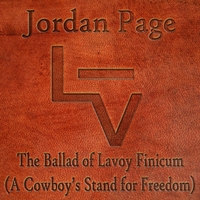 The Ballad of Lavoy Finicum (A Cowboy's Stand for Freedom)

A tribute to Arizona rancher and American patriot Robert "Lavoy" Finicum, who was murdered by federal agents on January 26th, 2016. This cowboy ballad reflects his honor, character, and sacrifice. It matters how you take a stand.

Downloads are available as MP3-320 files.

The Ballad of Lavoy Finicum (A Cowboy's Stand for Freedom) tells the story of Robert "Lavoy" Finicum, an Arizona rancher who was murdered by federal agents in Oregon on January 26th, 2016. Lavoy was part of a peaceful occupation of the Malheur Wildlife Refuge in Harney County, OR; an action which sought to expose the criminal abuse of ranching families in Oregon by the Bureau of Land Management. A local family, the Hammonds, had been victims of BLM abuse for years and refused to sell their family's land. BLM agents attempted to burn down their ranch, and in response the Hammonds lit a back-fire to stop the inferno from destroying their home. For this action Dwight and Steven Hammond were sentenced to 5 years in federal prison on charges of domestic terrorism. President Trump pardoned them in 2018 after learning of the injustice against them. Ammon Bundy, Lavoy Finicum and others took action and occupied the refuge, which was the administrative staging point for the BLM's activities. Lavoy spoke to the press about the constitution and his love of America, and about his plan to help ranchers disengage from the BLM system. On January 26th, 2016 Lavoy was headed to a neighboring county to meet with the sheriff. Federal agents set up an illegal "kill stop" and Lavoy veered his vehicle into a snowbank rather than risk hurting officers. He exited his vehicle unarmed, with his hands raised, and was executed in the snow. That night, Jordan Page wrote this song at 1 am. His commitment is to never stop performing this song to keep Lavoy's memory alive. 50% of the proceeds of the sale of this song will go to Lavoy's family.