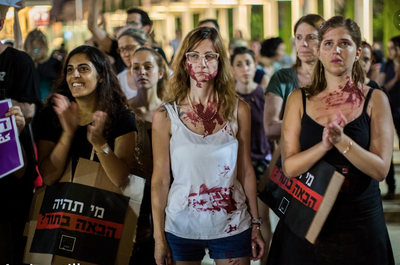 Violence Against Women in Israel

The worst of what goes on in Israel is largely or entirely ignored by Western governments and media.

Nearly two dozen Israeli women were murdered this year, compared to 17 last year and 192 since 2008, victims of domestic violence, according to a report by the Women's International Zionist Organization (WIZO).

Femicide increased 30% year-over-year, WIZO reported ahead of the November 25 International Day for the Elimination of Violence Against Women."

Various groups estimate around 200,000 Israeli women are victims of domestic violence - about half a million children witnessing it.

According to WIZO chairwoman Gila Oshrat, "(t)he figures must serve as a wake-up call for the Israeli government to take care of thousands of families living in the shadow of violence, and mainly for a change in the approach to the treatment of men."

"The solution has been placed before the government for over two years. The National Strategy to Combat Violence Against Women…approved in 2017…has yet to be budgeted. We call on the government to implement the plan and to change the face of the treatment of domestic violence."

About half of murdered women filed complaints with Israeli police before their deaths. One victim, unidentified for her safety, said "I was afraid he would murder me. My husband was abusive towards me in every sense —verbal, mental, financial and physical," adding:

"If he didn't like the food I cooked or if I said something that upset him, he would throw the entire Shabbat table on the floor and pull the head covering off my head."

"When I mentioned going to the police or brought up divorce, he threatened to kill me" - domestic abuse also harming her children.

Hundreds of abused Israeli women and children live in shelters, at best an enormously unpleasant experience, relying on largely uncaring strangers for help.

According to International Fellowship of Christians and Jews (IFCJ) president Yechiel Eckstein, "(t)o prevent the next murder, women must know that once they leave their violent environment, they will receive assistance until they manage to get back on their feet and be financially independent," adding:

"The Israeli government must develop a comprehensive program, providing professional training, proper shelters to house all the women who need assistance, and financial help that will enable them to live with dignity."

Under Israeli law, a husband who murders his wife is entitled to 50% of their dwelling, instead of their children getting it exclusively.

In 2017, over 62,000 complaints of violence were made to police, over a third by women, only 17% of their accusations resulting in indictments, largely against husbands or other relatives.

Less than half a percent of 500,000 Israeli children witnessing domestic violence get therapeutic help to deal with what they've endured, greatly affecting their young, developing minds.

The Netanyahu regime has done practically nothing to address this important issue - focusing almost entirely on apartheid repression, terror-bombing Syria, and serving the interests of privileged Israelis exclusively.

On Sunday, his pledge to convene a ministerial committee on domestic violence will likely be as hollow as earlier dismissiveness over this issue.

Last week, Netanyahu regime members rejected a proposal to establish a parliamentary committee of inquiry into the murder of women by their spouses, former spouses, and other relatives - showing their indifference to the issue.

Israel is not a convention on preventing and combating violence against women and domestic violence signatory country.

It's a serial violator of international human rights law and other fundamental international laws - the region's worst offender, second only to the US worldwide.