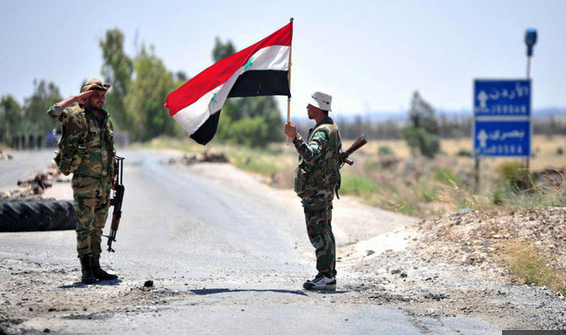 Turkey's Erdogan is a US/Russian supported tinpot despot, a regional menace, threatening anyone challenging or criticizing his iron-fisted repressive rule.

He threatened to attack Manbij in northwest Syria. His cross-border incursions flagrantly violate international law - waging naked aggression against a sovereign state, operating like the US.

On Friday, the General Command of Syria's armed forces announced the entry of its troops into the city, hoisting the nation's flag - part of government efforts to liberate all parts of the country from foreign invaders and terrorists they support. A Syrian military statement said the following:

"The General Command of the Army and the Armed Forces stresses the importance of making concerted efforts in maintaining national sovereignty."

Damascus "reaffirms its determination to crush terrorism and defeat all invaders and occupiers from the soil of sacred Syria."

"The Syrian Armed Forces guarantee the full security of all Syrian citizens and others present in the area."

Entering Manbij near Turkey's border is another step toward liberating Syria from US aggression and occupation of northern and southern parts of the country.

Kurdish YPG fighters left the city ahead of threatened Turkish aggression. Its heavily armed troops are mobilized along Syria's border, poised to attack when ordered.

Reportedly, US forces are in Manbij, aiding anti-government terrorists. Russia supports the presence of Syria's military everywhere in the country.

Its Foreign Ministry spokeswoman Maria Zakharova said sovereign Syria "has the right to" deploy its armed forces wherever it wishes on its own territory - stating what international law affirms.

"Due to the invading Turkish state's threats to invade northern Syria and displace its people similarly to al-Bab, Jarablus and Afrin, we as the People's Protection Units, following the withdrawal of our forces from Manbij before, announce that our forces will be focusing on the fight against ISIS on all the fronts in the east of the Euphrates," adding:

"In conjunction with this, we invite the Syrian government forces which are obliged to protect the same country, nation and borders, to assert control over the areas our forces have withdrawn from, in particularly Manbij, and to protect these areas against a Turkish invasion."

Kurdish and Syrian officials are discussing a broader alliance, serving the interests of both sides against foreign invaders.

Separately, the UAE, Kuwait and Bahrain reestablished diplomatic relations with Assad by reopening their embassies in Damascus, regimes of other Arab states perhaps to follow.

In cahoots with the Obama regime, Syria was expelled from the Arab League (AL) in 2011. At a meeting of its member states in March 2019, the Syrian Arab Republic may be readmitted.

Egypt called for its reinstatement. Consensus on this issue hasn't been reached so far. Washington opposes anything benefitting the country, its leadership and people.

On Saturday, Turkish officials will meet with their Russian counterparts in Moscow, talks to focus on Syria.

Ankara is part of the problem, not the solution for the country. How far Russia will push its leadership to respect Syrian sovereignty is unknown.

It's done little or nothing to oppose Erdogan's cross-border incursions, a show of weakness, not strength against an aggressor. It responds the same way to US-led NATO and Israeli attacks on the country.

Failing to confront them encourages endless war when toughness is vitally needed, the only possible way it can be ended.

Over six years of diplomacy in Geneva, Antana and Sochi achieved no significant breakthroughs. Nor will future talks likely fare better - because Washington wants war and regime change, not resolution and peace.

That's the obstacle to be overcome in all US war theaters, diplomacy a waste of time with Republicans and undemocratic Dems - toughness the only language they understand.