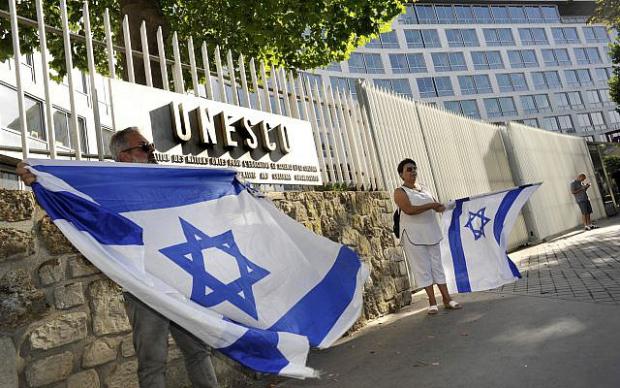 US and Israel Formally Quit UNESCO

The Trump and Netanyahu regimes announced their intention to leave the UN's educational, scientific and cultural organization in 2017.

Earlier, the State Department said "(t)his decision…reflects US concerns (about its alleged) anti-Israel bias." The Netanyahu regime used the same pretext to pullout.

The organization fosters "building peace in the minds of men and women" – notions Washington and Israel reject.

It "works to create the conditions for dialogue among civilizations, cultures and peoples, based upon respect for commonly shared values."

Through dialogue it hopes the "world can achieve global visions of sustainable development encompassing observance of human rights, mutual respect and the alleviation of poverty, all of which are at the heart of UNESCO'S mission and activities."

Ahead of her departure as US UN envoy, Nikki Haley embarrassed herself a final time, tweeting: "UNESCO is among the most corrupt and politically biased UN agencies. Today the US withdrawal from this cesspool became official."

She gone and won't be missed. Good riddance to bad rubbish, an expression I remember from my boyhood and adolescent days.

In mid-December, Haley turned truth on its head, claiming the US "demonstrated time and again our commitment to peace in the Middle East" - ignoring endless US wars of aggression in multiple theaters, an imperial agenda she wholeheartedly endorses.

She also lied saying "(w)e…offer our hand in friendship to the Palestinian people." The Trump regime and its predecessors long ago abandoned them, one-sidedly supporting Israel, contemptuous of Palestinian rights.

The agendas of UNESCO v. the US and Israel are polar opposite. The organization should have expelled both countries and their imperial allies long ago. They have no place in an organization supporting world peace.

They partner in endless wars of aggression against nations threatening no one. UNESCO's message for the new year said the following:

It's what the world needs now to prevent US-led warlords from destroying it. Withdrawal is a symbolic blow to world peace, a notion the US, NATO, and Israel abhor.

Anti-Israeli bias is all about truth-telling on its apartheid ruthlessness, its wars against Gazans and regional nations, its contempt for rule of law principles and democratic values.

The US operates the same way on a global scale. Washington and Israel stopped funding UNESCO in 2011.

The same year it granted Palestinians full membership in the organization. Israel called the move a "tragedy."

Earlier, US and Israeli pressure to block UNESCO's pro-Palestinian resolutions failed - notably its aim to safeguard "the cultural heritage of Palestine and the distinctive character of East Jerusalem," calling Israel's control of the city "illegal," along with recognizing Hebron's Old City as a Palestinian World Heritage Site."

Commenting earlier on the Trump regime's announced pullout, UNESCO director-general Irina Bokova said "(a)t the time when the fight against violent extremism calls for renewed investment in education, in dialogue among cultures to prevent hatred, it is deeply regrettable that the United States should withdraw from the United Nations agency leading these issues."

"At the time when conflicts continue to tear apart societies across the world, it is deeply regrettable for the United States to withdraw from the United Nations agency promoting education for peace and protecting culture under attack."

Ahead of his own withdrawal announcement, Netanyahu praised Trump's deplorable action, calling it "a brave and moral decision," adding "UNESCO has become a theater of the absurd. Instead of preserving history, it distorts it" - typical Netanyahu bald-faced lies.

The US is the world's leading state sponsor of terrorism, Israel a junior partner in its endless war on humanity.

Truth-telling about their destructive agendas is called "bias." Pile it on, lots more of the same needed in the new year and others to come.

The UN Comes Out In Support Of ANTIFA??! No Surprise Here

UN Chief Says Pandemic Must be Used to Deindustrialize West