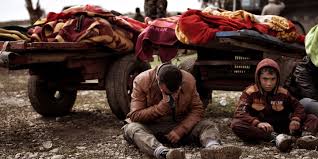 Pentagon Big Lies About Civilian Casualties in Iraq and Syria

Nothing Pentagon reports say about civilian and other casualties in US war theaters is credible.

Pentagon operations comprise about 95% of so-called "coalition" terror-bombings in Iraq, Syria, Afghanistan, and elsewhere, Britain and France responsible for most of the rest, partnering in US high crimes.

On December 30, the Pentagon lied, claiming it's been combating ISIS in Iraq and Syria along with its partners since 2014 - suppressing Washington's responsibility for creating and supporting its scourge, along with al-Qaeda, its al-Nusra offshoot, and likeminded jihadists, using them as proxy forces.

The Pentagon lied saying "nearly 8 million Iraqis and Syrians (were) liberat(ed) from ISIS's brutal rule" - perhaps from their lives, no other way.

It lied claiming "(w)e continue to employ thorough and deliberate targeting and strike processes to minimize the impact of our operations on civilian populations and infrastructure."

Fact: The US, NATO, Israel, Turkey, the Saudis, UAE, and their partners deliberately target and massacre civilians. Israel openly considers them legitimate targets, including young children, infants, the elderly and infirm.

The US and its imperial allies wage war without mercy, flagrantly breaching international, constitutional and US statute laws.

According to Gideon Polya's global body count on "avoidable deaths, deaths that should not have happened, excess mortality, and avoidable mortality," US-led Western states (NATO) and its partners are responsible for "over 30 million Muslim deaths from violence or deprivation (including starvation and untreated diseases) in (their) War (OF) Terror - aka" Pentagon-led war on Muslims in the Middle East, Central Asia, North Africa and elsewhere, adding:

"Fundamentalist jihadi non-state terrorists have been a major asset of US imperialism. (E)very jihadi atrocity has been used an as excuse to support further massive violence against Muslims by the US and its anti-Arab, anti-Semitic, and Islamophobic allies."

"Jihadi non-state terrorists were (and continue to be) backed by the US to overthrow secular rule" in one country after another - smashing them, massacring their people, civilians comprising the vast majority of casualties.

What's going on since US-initiated Security Council genocidal sanctions on Iraq (August 1990 - May 2003) and 1991 Gulf War followed by endless aggression still ongoing are some of history's greatest crimes without punishment for responsible parties, Washington guilty most of all.

Its planned, orchestrated, and implemented horrors continue with no end of them in prospect. When Soviet Russia dissolved in December 1991, Muslims became the convenient US enemy of choice - to unjustifiably justify endless wars of aggression against invented enemies.

No real ones exist, not then or now. The Pentagon's latest civilian casualty count in Iraq and Syria alone is an affront to the millions who've perished from US imperial wars of aggression for over generation since begun by Bush I, continued by the Clintons, Bush II and Cheney, Obama, and now Trump.

The official Pentagon body count from Operation Inherent Resolve in Iraq and Syria, pretending to be combating the scourge of ISIS the US supports is 1,139 civilians "unintentionally" killed by the US and its imperial partners - a colossal Big Lie.

The rape and destruction of Mosul, Iraq (October 2016 - July 2017) and Raqqa, Syria (June - October 2017) turning both cities to rubble, were responsible for tens of thousands of civilians massacred in each city.

Since the Gulf War and over a dozen years of genocidal sanctions on Iraq, millions of its civilians perished - 5,000 children under age-5 monthly from sanctions-caused starvation and untreated diseases.

For over a generation, under five US regimes, Washington has been waging genocidal wars against Muslim countries - no end of them in prospect as far ahead as anyone dare imagine, forever wars that won't end in our lifetime.

Operation Inherent Resolve and all other US wars of aggression are the highest of high crimes of war, against humanity and genocide, accountability not forthcoming.

Factbox: Where are people around the world protesting over George Floyd?

Systemic US War on Humanity, The Core Issue Gone Unaddressed

War on Press Freedom in the US