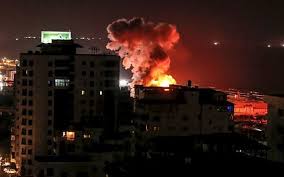 For over a dozen years, Israel has been waging war on Gaza without formally declaring it - the world community largely ignoring the suffering of its people.

Three times since December 2008, Israel waged full-blown war on the Strip, the last time in summer 2014. More all-out Israeli aggression is virtually certain ahead - whenever the Jewish state believes it serves its interests.

It's just a matter of when and for what invented pretext. Since Hamas overwhelmingly won parliamentary elections in January 2006, Israeli aerial and cross-border strikes on the Strip occurred at its discretion - Hamas falsely blamed for its high crimes of war and against humanity.

On Sunday, balloons attached to a model airplane, causing no damage or injuries, was the pretext for IDF terror-bombings. The Netanyahu regime called nothing an attack, an IDF statement saying "Hamas will bear the consequences of…actions" it had nothing to do with.

Two of its observation posts were terror-bombed. The US under Republicans and undemocratic Dems partners in Israeli high crimes against Gazans and other Palestinians, along with supporting its other regional aggression.

Israeli warplanes, attack helicopters, and cross-border shelling were involved in Sunday attacks on the Strip.

Israel claimed it responded to a homemade rocket striking an open area near Ashkelon, causing no harm or damage. The Netanyahu regime holds Hamas fully responsible for everything in the Strip.

In the aftermath of Israeli 2014 aggression on Gaza, Qatar pledged $1 billion in aid, much of it to help rebuild what Israel destroyed.

Last fall, Qatar announced $150 million in humanitarian aid to Gaza, including $60 for desperately needed fuel, the UN Development Program to oversee distribution of the aid.

At the time, longtime Israeli collaborator/illegitimate Palestinian president Mahmoud Abbas opposed the aid. He countered by cutting PA aid to the Strip, punishing Gazans in service to the Netanyahu regime.

Qatari-supplied fuel aimed to increase the supply of badly needed electricity, a few hours daily available in the Strip without it.

A spokesman for PA prime minister Rami Hamdallah voiced opposition to the delivery, saying "(a)ny international aid to (Gaza) should be through or with the coordination of the PA" - claiming it's "to preserve Palestinian unity" Abbas, his cronies and Israel oppose.

According to AMN News on Monday, the Netanyahu regime blocked further Qatari humanitarian aid to Gaza after two earlier installments were made.

On December 30, the Gisha Legal Center for Freedom of Movement said Qatari aid increased the supply of electricity in Gaza from four to around 11 hours daily.

It lets most Gazans have access to running water around eight hours daily, around one-fifth of its households only every third day.

Before Qatari aid, Gazans only had access to water either one day weekly, once every three or four days for a limited number of hours.

Qatar agreed to provide aid for six months, possibly intending to continue it once the time frame elapsed.

Former MI6 Spy Alastair Crooke: For This To Slip Would Be The 'End Of Empire'