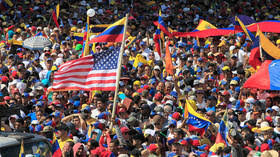 When America goes to war against nations threatening no one, US major media cheerlead naked aggression instead of denouncing it.

Trump is the latest in a long line of US usurpers, seeking extrajudicial aims, wanting all sovereign independent governments replaced by pro-Western puppet rule - Pompeo and Bolton orchestrating his imperial agenda.

Their cheerleading for coup d'etat rule in Venezuela over social democracy and rule of law governance is deafening.

NYT editors never met a tinpot despot allied with US interests it didn't support, a war of aggression it didn't welcome, or a coup d'etat it didn't endorse - consistently on the wrong side of major issues, including what's going on in Venezuela.

Democratically elected and reelected Venezuelan president, Maduro's indisputable legitimacy isn't good enough for Times editors, disgracefully calling him a "strongman," disgracefully adding "(t)hat (he) must go has been obvious for some time."

The Times falsely blamed him for "br(inging) the country to ruin" - ignoring years of US-war on Venezuela by other means, the main reason for economic and financial turmoil, ordinary people harmed most, low oil prices worsening things.

Throughout the Bolivarian Republic's existence, the Times backed toppling it by coup d'etat or other means, its reporting on the country saturated with disinformation, Big Lies and fake new, including the fabricated claim that Maduro "orchestrated his own reelection last May" by foul means.

The nation's electoral process is scrupulously open free and fair, democracy the way it should be, polar opposite America's illegitimate money-controlled system, war party rule with two extremist right wings.

Ignoring international and US constitutional law, the Times shamefully said the Trump regime "is right to support Mr. Guaido" - elected by no one in

Venezuela to serve as president, illegally recognized by Trump officials, designated by Pompeo and Bolton as a convenient US puppet if their scheme gains traction and sticks.

Demanding Maduro "must go," the Times endorsed the rule of law and democratic governance going with him.

Ignoring an attempted Trump regime coup d'etat, a longstanding US specialty, it reinterpreted Venezuelan constitutional law, falsely claiming the attempted ouster of Maduro is well "grounded" in it - a bald-faced lie on two counts.

Nothing in Venezuelan constitutional or international law permits what's ongoing, just the opposite, including the prohibition of interference by any nation in the internal affairs of others - no exceptions other than in self-defense if attacked.

WaPo is a mouthpiece for CIA lawlessness against other nations worldwide, along with supporting US aggression against one country after another. It's a propaganda operation, not a legitimate news service.

The same goes for the NYT and other US major media when it comes to reporting on geopolitical issues and many others.

Supporting actions contrary to the rule of law smacks of complicity with it, virtually all US major media guilty of operating this way.

Wall Street Journal editors are some of the most extremist US ones, calling the Trump regime's attempted coup d'etat against Venezuelan democratic governance support for "return(ing) democracy" to the country - wanting it replaced with fascist tyranny left unexplained.

They called democratically elected and reelected President Maduro a "dictator," a phony label thrown at numerous figures by the US imperial state and supportive media.

They denounced Russia for supporting Maduro's legitimacy and Venezuelan democracy. They turned truth on its head calling Cuba "the imperial power in Caracas," disgracefully adding:

Few in the region exist, none in the US and its regional colonies, saluting and obeying orders from Washington, operating extrajudicially.

Are they for another Bay of Pigs invasion, along with the same thing against Venezuela?

US major media support naked aggression, tyranny over democratic rule, and fake news over journalism the way it should be.