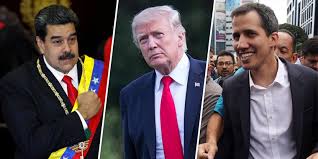 Republicans and undemocratic Dems consider planet earth America's backyard, wanting US control over all other nations, their resources and people.

They want the power and influence of Russia and China curbed, the only countries able to effectively challenge US hegemonic aims, especially united for a common objective.

According to the Wall Street Journal, the Trump regime's aim to replace Venezuela's Nicolas Maduro with puppet Juan Guaido it controls is part of a plot "to reshape Latin America," citing unnamed US officials.

Because of its world's largest oil reserves, Venezuela is the prize Washington values most, Cuba and Nicaragua also targeted for regime change, along with efforts to counter alleged regional "inroads made by Russia, China and Iran."

The most notable US strength is its ability to rape and destroy one nation after another, a strategy risking eventual catastrophic nuclear war if confrontation with Russia and/or China occurs - in their parts of the world or elsewhere.

The Sino/Russian strategy of pursuing cooperative relations with other countries enhances their world standing, including in Latin America, the Middle East, North Africa and elsewhere on the continent, along with Central Asia and the Indo/Pacific - parts of the world the US considers its backyard. Their people feel otherwise.

According to the Journal, US officials consider Cuba "the more serious national security threat." No country anywhere threatens the US. Claims otherwise are invented to defend indefensible policies.

The issue with Venezuela, Cuba, Russia and China is their sovereign independence, free from US hegemonic control, what Republicans and undemocratic Dems seek worldwide, forcefully if other tactics fail.

"In Cuba, Venezuela, and Nicaragua, we see the perils of poisonous ideologies left unchecked, and the dangers of domination and suppression," adding:

"The Troika of Tyranny in this hemisphere — Cuba, Venezuela, and Nicaragua — has finally met its match." The Trump regime's priority is to "unmask and tell the untold story about the very real and factual story of Cuban involvement in Venezuela."

From the inception of Venezuela's Bolivarian democracy, relations with Cuba were embraced, both nations aiding each other politically and economically – including against US dark forces, wanting fascist tyranny replacing their sovereign independence.

There's nothing illegitimate or sinister about their relations, an important alliance – polar opposite how Washington seeks dominance over all other nations, forcefully if other methods fail.

It wants sovereign rule in Venezuela, Cuba and Nicaragua  replaced by pro-Western puppet regimes it controls, waging economic, financial and sanctions war on these and many other countries unwilling to serve US interests over their own.

Their scheme involves ousting Venezuela's Maduro, followed by regime change in Cuba and Nicaragua. If the plot fails, Moscow and Beijing will benefit. It's to their advantage to significantly aid their regional allies, aiming to defeat Washington's dirty game, including against Iran in the Middle East.

According to the Journal, First Justice and Popular Will parties in Venezuela joined forces to provide a more formidable challenge to Maduro. Guaido is a Popular Will member.

Neighboring countries Brazil and Colombia are ruled by extremist right wing regimes closely allied with Washington. At yearend, Pompeo met with his Brazilian and Colombian counterparts and leadership, discussing regime change in Venezuela.

Maduro was overwhelmingly reelected last May, inaugurated for another term on January 10, disruptive street protests in Venezuela launched at the time, followed by the Trump regime recognizing Guaido as (illegitimate) interim (US controlled puppet) president.

The latest US plot is ongoing to try removing Maduro from office, supported by most Latin and Central America regimes, along with most European and other countries, taking orders from Washington, saluting and obeying like obedient colonies.

On Thursday, the European Parliament officially recognized US-designated puppet Guaido as Venezuela's interim president, his illegitimacy not an issue.

A resolution adopted urged EU leaders to adopt "a strong, unified stance," recognizing Guaido until new elections are held to replace real democracy in the country with a fantasy version like in America and other Western societies.