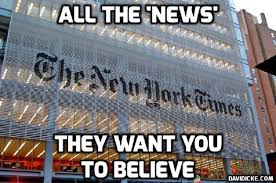 The self-styled newspaper of record has been hostile to Venezuelan social democracy since Hugo Chavez's December 1998 election.

Since usurper in waiting Guaido illegally declared himself interim president, the Times endorsed him, supporting the attempted power grab over fundamental rule of law principles.

Serving as his virtual press agent, its editors hailed what they called "a fresh-faced leader from humble origins (with a) vision of taking the country forward."

The Times ignores his illegitimacy, the attempted Trump regime's coup against Venezuelan social democracy, wanting the nation colonized and controlled, its resources looted, its people exploited, another imperial trophy gained.

That's what US war on Venezuela by other means is all about, what the NYT and other establishment media suppress, supporting what demands denunciation.

Endorsing tyranny over democratic rule, Times editors called on Venezuela's military to "abandon Maduro" - and millions of ordinary Venezuelans along with him, as well as the nation's sovereign independence.

They urged its commanders to support Guaido, a US imperial stooge, a traitor to his country and people.

Suspending criticism of Trump over Venezuela, the Times supports his coup plot, shamefully saying he's "championing a people driven to desperation by a valueless currency and drastic shortages of medicine and food."

It's silent about US war on the country by other means, largely responsible for dire economic conditions, exacerbated by low oil prices.

Saying "50 nations (whether the true number or not) have joined the United States in no longer recognizing Mr. Maduro as president," the Times ignored majority world community opposition to Trump's coup attempt, including the UN, the plot flagrantly violating its charter.

US efforts to topple a sitting government have nothing to do with democracy building, humanitarian intervention or responsibility to protect.

What's going on in Venezuela flagrantly violates international and US constitutional law, what the Times refuses to explain, supporting what demands denunciation.

A weekend confrontation on Venezuela's border with Colombia and Brazil looms over cookies masquerading as humanitarian aid - while US economic war on the country rages.

Phony aid is interventionist and provocative, a political stunt unrelated to concern for ordinary Venezuelans. Russia, China, Cuba and other countries sent hundreds of tons of real aid, welcomed by Maduro.

The Times: "Obviously it would be best for all if the military let Mr. Maduro know that his time was up and assisted Mr. Guaido in organizing new elections."

"Obviously" it's vital for Venezuela's military to resist Trump's coup attempt, including its Trojan horse aid stunt this weekend - keeping borders closed, protecting the nation's sovereignty from US interventionism.