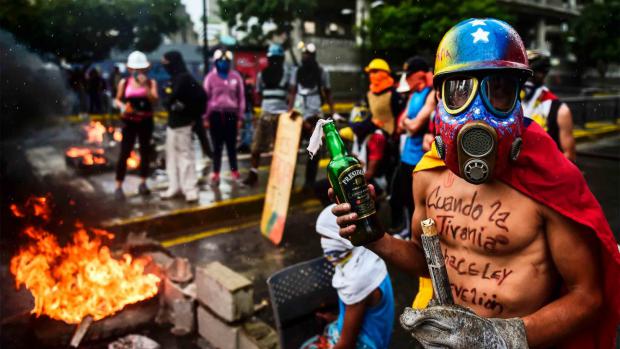 On Thursday, Russian Foreign Ministry spokeswoman Maria Zakharova said Moscow has intelligence information that the US and its imperial partners may provide opposition elements in Venezuela with assault weapons and related equipment - part of the Trump regime's plot to topple its democratic government.

"(T)his is what (Trump hardliners) mean when they talk about delivering humanitarian aid," she said - cover for their diabolical plot.

It includes shipping tools for terror on aircraft connected to the CIA, delivering them "through a neighboring country," adding: "There is also a (US-controlled) Ukrainian trace in this brazen plan. In particular, it is going to involve the Antonov state company, as far as we understand."

On Friday, Russia's UN envoy Vassily Nebenzya said Moscow will challenge the Trump regime in the Security Council if it launches aggression on Venezuela while provocatively attempting to deliver Trojan horse "humanitarian aid" cross-border from Colombia, Brazil, and/or by sea.

"I hope that we will have no reason to do this. But if there is a reason, we will do it," Nebenzya stressed, adding: What's at stake is "not only about Venezuela. It is also about the approach to resolving international problems and different crises."

Venezuelan Foreign Minister Jorge Arreaza said Caracas is coordinating a political counterattack against the US with Moscow, adding: "Russia plans to call an emergency session of the Security Council in case of an aggression."

"There are several documents that are being proposed — addressed to the secretary general, to the Human Rights Council. There are several initiatives on the table but the decision will be made not only by Venezuela."

"Decisions will be made collectively" by over 50 UN member states, supporting Maduro's legitimacy and Venezuelan sovereignty.

On Friday, representatives of these nations met at UN headquarters. They represent a significant political counterforce against the Trump regime's imperial aims.

On Tuesday, Sergey Lavrov will discuss Venezuela with his Chinese and Indian counterparts in Wuzhen, China - on the sidelines of a ministerial meeting of these nations.

According to Maria Zakharova, they'll discuss "pressing global issues, including arms control, the situation in Venezuela, the North Korea issue, the Syrian crisis, and the situation in Afghanistan" - along with other topics on their agenda.

Separately, Fort Russ reported that Russia intends trying to save Venezuela by political intervention, its approach aiming for an outcome similar to what it hopes to achieve in Syria militarily and diplomatically at the behest of Damascus.

Calling Venezuela an "economic Syria" for Russia, Alksnis explained how its military intervention in Syrian Arab Republic changed the dynamic on the ground, saving the country from defeat by US-led aggression.

The Kremlin hopes to accomplish something similar in Venezuela, short of military intervention, a daunting task without toughness exerted against the US, the only effective way to challenge its imperial lawlessness.

Diplomacy is a waste of time. The US doesn't negotiate. It demands. Efforts in Syria proved largely futile since 2012, no major breakthroughs achieved. Venezuela won't be easier.

The US aims for unchallenged hemispheric control. I suspect Trump regime hardliners aim to topple Maduro by economic and sanctions war - combined with proxies on the ground stoking violence and chaos more intensively than so far.

If these tactics fail, which is most likely, military invention is a fallback option, likely justified by the favorite US dirty trick - a false flag wrongfully blamed on Maduro.

Russia I believe needs to do more than intervene in Venezuela politically to foil the Trump regime's aims in the country.

It's why I proposed sending a large contingent of military peacekeepers, ideally together with China, telling Trump regime hardliners to keep hands kept off Venezuela, backing it with military might, hopefully not needed for confrontation with the US.

If a joint peacekeeping force deployed to the country, I suspect it would give the Trump regime pause about intervening militarily.

Post-WW II, the US only attacked weaker, non-nuclearized nations, none able to strike back at its homeland - the capability Russia and China have if confrontation with the US occurred and escalated.

According to Fort Russ, "Moscow has presented to Caracas an informal plan for the restoration of the national economy." Maduro needs all the help he can get to turn the Venezuelan economy around.

Russia has skills and clout needed to save Venezuela. It remains a daunting task but doable I believe if Moscow goes all-out to preserve and protect the nation's sovereignty.

Jointly with China would work best - a strong message to Washington, showing Venezuela has powerful allies willing to defend its sovereign rights.