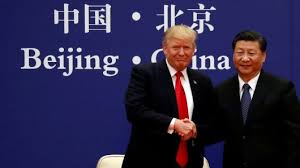 Short of an agreement, he threatened to increase US duties from 10 - 25% on $250 billion worth of Chinese products, along with levying tariffs on an additional $267 billion of its goods.

On Sunday, he tweeted the following: "I am pleased to report that the US has made substantial progress in our trade talks with China on important structural issues including intellectual property protection, technology transfer, agriculture, services, currency, and many other issues."

"As a result of these very productive talks, I will be delaying the US increase in tariffs now scheduled for March 1. Assuming both sides make additional progress, we will be planning a summit for President Xi and myself, at Mar-a-Lago, to conclude an agreement."

As the saying goes, the devil is in the details. It's also what follows whatever Beijing and Washington agree on, along with how major unresolved issues will be dealt with.

It's concerned about its growing world clout, wanting no challengers to its aim for dominance over all other countries.

Beijing is well on its way to becoming an economic, industrial, and technological powerhouse - what Washington wants to prevent, aiming to undermine its "Made in China 2025" strategy.

Major bilateral structural differences are too irreconcilable to resolve. How both countries intend to square the circle in crafting an agreement remains to be seen.

Results from multiple rounds of talks have been mixed at best. China is willing to buy billions of dollars more US goods. It's unwilling to pull back from its strategic aims.

Few details were released about the February 21 - 24 talks in Washington, scheduled for Thursday and Friday, extended for another two days, more talks to follow - showing whatever was agreed on, major issues remain unresolved.

One analyst said talks are "like pulling teeth," both sides far apart on structural issues. Chinese media expressed cautious optimism from the latest talks, warning that whatever is agreed on won't please everyone in both countries

China's Global Times said both countries seem "head(ed) toward a deal over the thorny issue of tariffs."

Chinese analyst Liu Weidong expressed caution, saying "I think (whatever is agreed on) is only an extension of the trade truce without any specific conclusion. It is not time yet to be overly optimistic," adding:

"China-US ties have not yet ridden out the storm. The tension between them has even not reached the climax."

"Bilateral relations will only head toward a more difficult path. Because in addition to trade relations, there are many issues plaguing China-US ties."

Major political, economic, and military differences between both countries are longstanding. As China's world stature grows at the expense of US dominance, bilateral disagreements are likely to increase.

The same goes for US relations with other major countries. A US dominated unipolar world no longer exists.

Short of trying to shift the balance of power back to Washington's advantage by waging nuclear war endangering humanity's survival, multi-world polarity is growing at the expense of one nation dominating all others, a reality the US is unable to change.

Nor will it get China to respect US interests at the expense of its own.