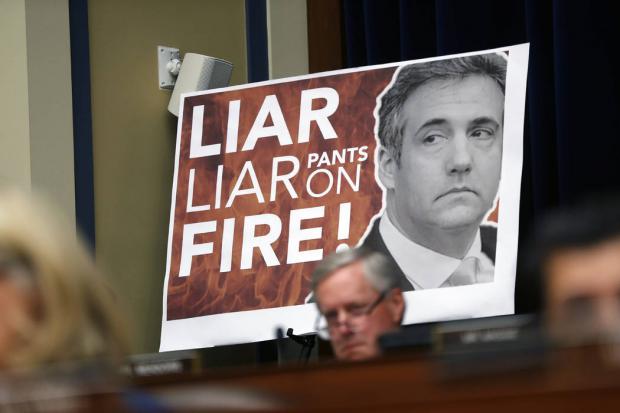 Once a liar, always one, never to be trusted. He pleaded guilty to lying to Congress, tax evasion, and campaign finance violations. He earlier admitted that Trump's efforts to build a tower in Moscow ended in January 2016. See below.

Law Professor Jonathan Turley slammed him, saying he "spent his career as a legal thug whose only appeal was his willingness to do things that most lawyers would not do," adding:

He was a "loyal hatchet man" for Trump before "becom(ing) a Mueller man…a serial liar and crook," hoping for a lighter sentence. Disbarment ended his legal career.

In his opening statement to the House Oversight and Reform Committee on Wednesday, he again perjured himself.

He lied straightaway saying "I am here under oath to correct the record, to answer the Committee's questions truthfully, and to offer the American people what I know about President Trump.

Misinformation and bald-faced Big Lies followed. He justifiably called Trump a racist. DLT's public record speaks for itself. He's likely a "conman" and a "cheat" as well.

"Behind every great fortune lies a great crime," Balzac once said. Billionaires like Trump amass wealth the old-fashioned way by dubious means.

Assange threatened to sue the London Guardian over its fabricated report that he met then-Trump campaign manager Manafort.

WikiLeaks said it was willing to bet $1 million and the Guardian editor's head that no Assange/Manafort meeting ever took place. Claims otherwise were fabricated - again yesterday by Cohen under oath.

He accused Trump of paying hush money "to cover up his affair with an adult film star and prevent damage to his campaign."

Is paying hush money to Trump's paramours a criminal offense? The issue is unlikely to swing an election or reelection for one candidate over another.

Numerous US presidents and wannabe ones had extramarital affairs – including Washington, Jefferson, Franklin Roosevelt, Dwight Eisenhower, Jack Kennedy, Lyndon Johnson and Bill Clinton, among others.

Little or nothing was said about their private lives while campaigning or throughout their tenure, Clinton an exception.

Trump's sex life is his own business, no one else's except his wife's. It's unrelated to affairs of state – only a crime when rape or other type sexual assault is committed.

Cohen produced what he called "(c)opies of letters (he wrote for Trump) that threatened his high school, colleges, and the College Board not to release his grades or SAT scores."

Among the nation's founding fathers, George Washington was the least educated. His limited formal education ended when his father died, replacing him as family head along with his mother.

On Wednesday, Cohen said he "lied to Congress about when Mr. Trump stopped negotiating the Moscow Tower project in Russia. I stated that we stopped negotiating in January 2016. That was false – our negotiations continued for months later during the campaign."

Was he lying earlier or yesterday? He added that Trump didn't tell him to lie to Congress directly, adding when "negotiating in Russia for him, he would look me in the eye and tell me there's no business in Russia and then go out and lie to the American people by saying the same thing. In his way, he was telling me to lie."

Were his above comments true or false? A convicted perjurer is always suspect - never to be believed without credible proof substantiating remarks made.

Cohen: Trump "knew of and directed the Trump Moscow negotiations throughout the campaign and lied about it. He lied about it because he never expected to win the election."

"He also lied about it because he stood to make hundreds of millions of dollars on the Moscow real estate project."

Cohen lied claiming DNC emails were hacked during the 2016 presidential campaign. They were leaked by a Dem insider. No hacking occurred by Russia or any other party.

WikiLeaks published what it believed to be credible information, what good journalism is all about. It never received or published anything gotten from Russia. Bald-faced Big Lies claim otherwise.

Responding to Cohen's congressional testimony, Trump said he "was one of many lawyers who represented me (unfortunately)."

"He had other clients also. He was just disbarred by the (New York) State Supreme Court for lying & fraud. He did bad things unrelated to Trump. He is lying in order to reduce his prison time. Using Crooked's lawyer!"

Trump and Cohen are serial liars, their remarks suspect when made. Notably in his Wednesday congressional testimony, Cohen presented no evidence of Trump or his team colluding with Russia during the 2016 presidential campaign - because no evidence exists.