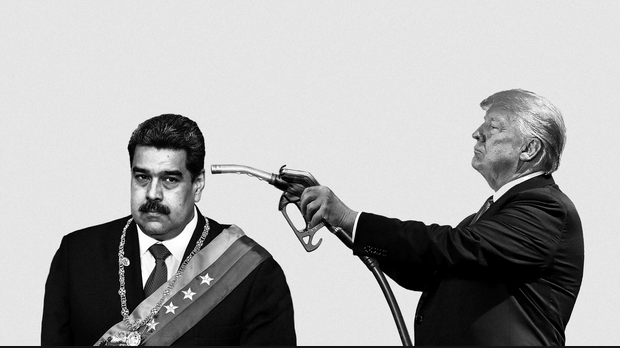 A previous article discussed dueling world's apart Russian and US Security Council resolutions on Venezuela - voted on at a Thursday session on the country.

Moscow supports world peace, stability, the rule of law, preserving and protecting the territorial integrity of all nations, free from foreign intervention - and the legitimacy of Venezuela's political process, the world's best.

It recognizes and supports Nicolas Maduro as the country's democratically elected and reelected president - opposing US-designated puppet/usurper in waiting Guaido, a traitor to his nation, a convenient Trump regime stooge, a provocateur nobody with no legitimacy.

Like its US predecessors, the Trump regime wages endless wars of aggression against nations threatening no one. It orchestrates, promotes, and initiates color revolutions, old-fashioned coup d'etats, and other dirty tricks to replace sitting governments with puppet ones it controls.

Its military, industrial, security, and media complex is the greatest threat to world peace, as well as humanity's well-being and survival. Washington's rage for unchallenged global dominance risks destruction of planet earth and all its life forms.

On Thursday, the Trump regime used the Security Council as a platform to promote its coup d'etat plot against Venezuela.

For the first time since establishment of the UN in 1945, one of its member states, the US, tried getting the world body to illegally approve replacing a democratically elected leader with an illegitimate imposter it controls.

What occurred Thursday on the world stage was disgraceful, the shame of the Trump regime's reason for calling the session breathtaking. Nine of 15 Security Council's members supported its lawlessness.

Three alone stood tall against it - Russia, China and South Africa, the former two using their veto power to righteously defeat what had no chance for adoption. Three other nations abstained.

Seven nations opposed Russia's draft resolution, member states allied with or pressured to support its unlawful imperial designs on Venezuela - on the phony pretexts of democracy building and responsibility to protect (R2P).

During the session, Russia's UN envoy Vassily Nebenzia warned that the US draft was all about "a step forward in preparing a real intervention, not a humanitarian one…a pretext for (unlawful) external interference," adding:

"(W)e have reached the climactic scene of the United States' show of double standards on Venezuela" - promoting its diabolical regime change plot against a sovereign state.

Ahead of the vote, Nebenzia said the following:

"The majority of countries in the Western hemisphere, notwithstanding their political views, believe that Venezuela's problems should be solved by the Venezuelans on the basis of a dialogue."

"Nation-wide and inclusive dialogue is what Venezuela needs now. However, Washington persistently marches towards its goal to escalate tension and implement the scenario that envisages unconstitutional change of authority."

During Thursday's session after the vote on Russia's draft resolution, Nebenzia said "the Security Council has been dragged into this political show again."

"The draft resolution proposed by the US delegation was designed to (unlawfully) change (the Venezuelan government) under the guise of taking care of the people. We have seen all this in case of Libya, Iraq, Syria, and Afghanistan."

In 2011, the US used the Security Council as a platform to unjustifiably justify terror-bombing Libya, a "savage" operation. "We all know the end result" - a nation devastated by endless violence and chaos, its people immiserated.

"Washington and London" are at it again. "They robbed (Venezuela) of billions of dollars. Now they enforce handouts and demand a regime change in return. You first create immense humanitarian problems, then urge the world to solve them."

"(T)he US draft does not aim at solving Venezuela's problems. We proposed an alternative draft resolution that could have helped the Venezuelans solve their problems on their own, without (illegal) external interference."

"(A)t least 60" nations publicly expressed support for Venezuela's sovereign rights and democratically elected government. "The recent meeting on Venezuela that we held confirmed this. The majority of them are present in this room."

"Today's vote is a vivid example of why there is the veto right. Veto is needed to protect peace and the right of peoples to be masters of their fate."

"Today's meeting proved that without veto the Council itself would have risked to turn into a threat to peace and security. Good thing it has not happened."

During the session, Venezuela's UN envoy Samuel Moncada "demand(ed) respect for (his nation's) sovereignty and territorial integrity, and non-intervention in our internal affairs" - according to UN Charter principles and other international law.

Ahead of Thursday's SC session, Russian Foreign Ministry spokeswoman Maria Zakharova said its government will not support the Trump regime's draft resolution on Venezuela - part of its sinister plot to replace its sitting government with one it controls.

The US notoriously interferes in the internal affairs of other nations illegally, including their elections, aiming for unchallenged global dominance - by brute force if other tactics fail.