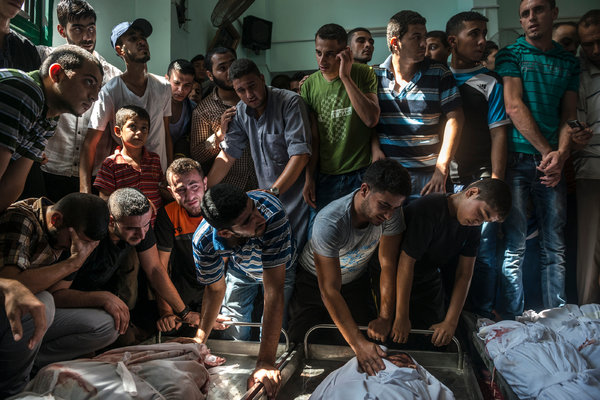 There's no ambiguity about longstanding Israeli high crimes of war, against humanity, and slow-motion genocide in Gaza - similar crimes committed throughout the Territories for over half a century, accountability never forthcoming.

An entire Palestinian population is held hostage to Israeli apartheid viciousness, Gazans harmed most of all under politically imposed/suffocating blockade, along with repeated IDF land, sea, and aerial attacks on its people.

"No justification (has existed during the past 11 months) for Israel to shoot (Palestinians threatening no one) with live fire."

According to COI chair Santiago Canton, "(t)he Commission has reasonable grounds to believe that during the Great March of Return, Israeli soldiers committed violations of international human rights and humanitarian law. Some of those violations may constitute war crimes or crimes against humanity, and must be immediately investigated by Israel."

The COI report way understated the casualty count by live fire, rubber-coated steel bullets, toxic tear gas, and other forms of Israeli violence against peacefully demonstrating Gazans threatening no one.

Around 250 Gazans were killed, over 25,000 others injured, many seriously, including women, children, and clearly identified paramedics and journalists.

The COI report claimed "(m)ore than 6,000 unarmed demonstrators were shot by (unthreatened IDF) snipers, another 3,098 injured by "bullet fragmentation, rubber-coated metal bullets or by hits from tear gas canisters."

No Israeli soldiers were killed or injured by Palestinians during demonstrations. The COI cited four IDF soldiers wounded (perhaps by friendly fire), another killed "outside the protest sites."

In flagrant violation of international law, Israeli soldiers use live fire against nonviolent Palestinians when demonstrations are held.

"…Israeli forces…stationed in prone positions and in military jeeps along the fence with Israel continued to use excessive force against the demonstrators by opening fire and firing teargas canisters at them."

"As a result, dozens of the demonstrators were hit with bullets and teargas canisters without posing any imminent threat or danger to the life of soldiers."

Israeli impunity encourages continued use of excessive force against defenseless Palestinians, including the highest of high crimes against peace. COI member Sara Hossain said the following:

"There can be no justification for killing and injuring journalists, medics, and persons who pose no imminent threat of death or serious injury to those around them."

"Particularly alarming is the targeting of children and persons with disabilities. Many young persons' lives have been altered forever" by loss of limbs and other disabling injuries - including from illegal use of exploding dum dum bullets.

The COI report said evidence showed "Israeli snipers shot at journalists, health workers, children and persons with disabilities, knowing they were clearly recognizable as such."

"Unless undertaken lawfully in self-defense, intentionally shooting a civilian not directly participating in hostilities is a war crime."

"The Commission found reasonable grounds to believe that individual members of the Israeli Security Forces, in the course of their response to the demonstrations, killed and injured civilians who were neither directly participating in hostilities, nor posing an imminent threat. These serious human rights and humanitarian law violations may constitute war crimes or crimes against humanity."

There's no maybe about it. IDF soldiers were given unlawful orders to use live fire at peacefully demonstrating Gazans.

The PCHR earlier said Israeli forces acted on orders from the "highest military and political echelons (to use) excessive force against the peaceful demonstrators who posed no threat to the life (or security) of Israeli soldiers."

The COI was mandated by the UN Human Rights Council to determine accountability for deaths and injuries during Great March of Return protests.

Its report will be presented to the UN High Commissioner of Human Rights, perhaps to the International Criminal Court as well.

Demanding Israel investigate its own high crimes of war and against humanity assures whitewash if anything is undertaken.

An independent tribunal with teeth is essential to hold Israeli military and civilian authorities accountable for longstanding  high crimes too egregious to ignore any longer.