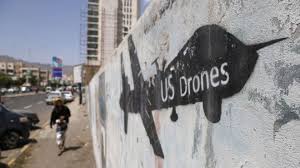 The US, NATO, and Israel indiscriminately massacre civilians when attacking targeted nations or Palestinians.

For Israel, it's official policy under its Dahiya doctrine, unlawfully calling civilians legitimate targets, including women, children, infants, the elderly and infirm.

"We will apply disproportionate force at the heart of the enemy's weak spot (civilians) and cause great damage and destruction," adding:

"From our standpoint, these are not civilian villages (towns or cities). They are military bases. This is not a recommendation. This is a plan. And it has been approved" - notably against Gaza.

The US and NATO operate the same way without publicly affirming it as official policy. Drone wars are a notorious example.

Teams of remote warriors work far from or close to battlefields. Drone pilots operate computer keyboards and multiple monitors, sensor staff working with them, handling TV and infrared cameras, as well as other high-tech drone sensors.

Faceless enemies nearby or half a world away are attacked. Virtual war kills like sport, drone warriors never witnessing deadly bloodshed, dismembered bodies, and human suffering close up - guiding weapons with joysticks and monitors like video games.

According to an earlier Congressional Research Service report, around one-third of US warplanes are drones (unmanned aerial vehicles - UAVs) - up from 5% early in the new millennium.

Others were deployed in Bosnia in 1995 and against Serbia in 1999. They're now commonly used in all US wars. Under unofficial rules of engagement, anything goes, international and US statute laws of war long ago abandoned.

Official claims about precise, effective "targeted killings (with) minimal downsides or collateral impacts," making the US safer, is utter rubbish. Polar opposite is true, confirmed by first-hand evidence.

"US drone strike policies cause considerable and under-accounted-for harm to the daily lives of ordinary civilians, beyond death and physical injury."

"Those living under drones have to face the constant worry that a deadly strike may be fired at any moment, and the knowledge that they are powerless to protect themselves. These fears have affected behavior."

He rescinded a DNI rule to produce an annual report of civilian deaths by drones outside of official war theaters. A White House National Security Council statement dismissively said the order removes "superfluous reporting requirements" that "distract our intelligence professionals from their primary mission."

The order is all about suppressing crimes of war and against humanity. ACLU national security project director Hina Shamsi responded to the EO, saying:

Despite way "imperfect" reporting on civilian deaths by drones, Trump's EO aims to "hide from the public the government's own tally of the total number of deaths it causes every year in its lethal force program."

"Now the government is also no longer committed to providing reasons why its total death count is different from independent credible reports" - like SU/NYU's and others, revealing the disturbing reality of drone wars.

During his tenure, Obama greatly escalated drone strikes over his predecessors, according to the Bureau of Investigative Journalism, adding drone wars increased to an unprecedented level under Trump - notably in Yemen, a six-fold increase over 2016.

"(E)ven individuals not considered to pose a 'continuing and imminent threat' can be targeted for death without trial" under a secret assassination program - murder by drones, conventional warplanes, and/or special forces operations.

According to Reprieve, "(t)he CIA's own leaked documents concede that the US often does not know who it is killing, and that militant leaders' account for just 2% of drone-related deaths."

All US wars violate fundamental international and domestic rule of law principles. Millions of post-9/11 casualties were and continue to be civilians - the toll largely suppressed in the mainstream.

Trump's EO compounds longstanding US suppression of the human toll and devastation from US wars of aggression.