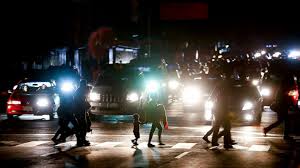 Their latest stunt perhaps was sabotaging Venezuela's electrical grid, plunging much of the nation into darkness - a failed tactic, Maduro saying the following:

"The electric energy war declared and directed by the US imperialists against our people will be destroyed. Nothing and nobody will win over the people…"

A blackout affected 21 of Venezuela's 23 states, along with the Caracas Capital District. According to the National Electric Power Corporation reported, the nation's Guri dam hydroelectric power plant was sabotaged, adding:

"It is a part of an electric war against the state. We will not allow this! We are working to restore power supply."

He blamed the outage on "deliberate sabotage" of the Guri hydroelectric power plant, adding: The nation "has been, once again, the target of an attack in an Electric War."

"But here we have a strong government. They will not demoralize or defeat us…They have failed in past attempts and they will fail again."

Late Thursday, power was restored to around 60% of the country, things normalized on Friday - ahead of the next of the Trump regime's assault tactic.

The outage affected metro lines and mobile services. Without power, national pubic and private services can be partly or entirely shut down - the reason behind the likely sabotage, even knowing things would be restored in short order.

"ALERT: Reports of a complete power outage all across #Venezuela at this moment."

"18 of 23 states & the capital district are currently facing complete blackouts."

#MaduroRegime is a complete disaster."

"The power outage and the devastation hurting ordinary Venezuelans is not because of the USA. It's not because of Colombia.  It's not Ecuador or Brazil, Europe or anywhere else. Power shortages and starvation are the result of the Maduro regime's incompetence."

"Maduro's policies bring nothing but darkness. No food. No medicine. Now, no power. Next, no Maduro."

US imperial rage for global dominance, by whatever it takes to achieve its objectives, reflects the heart of darkness, a diabolical agenda hostile to peace, equity and justice - a scourge vital to challenge and defeat.

World peace, fundamental freedoms, nations fit to live in, and perhaps humanity's survival depend on it!

Cardiologist Richard M. Fleming and Others on the Mother of All Public Health Scams

Permanent US Occupation of Afghanistan Planned