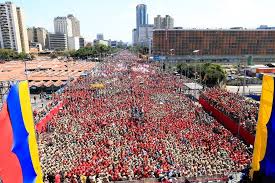 US major media one-sidedly support the Trump regime's coup plot to eliminate Bolivarian social democracy - wanting Venezuela transformed into a US vassal state ruled by a subservient puppet, Washington gaining control over the country's oil and other valued resources.

That's what imperialism is all about, a diabolical scheme for unchallenged dominance by whatever it takes to prevail, the rule of law ignored, the human toll of no consequence.

On Saturday, thousands of Venezuelans rallied in Caracas against the Trump regime's coup plot, including its electricity war on the country. They participated in Bolivarian Anti-Imperialist Day commemorations.

US major media ignored the huge turnout, focusing solely on largely well-off Venezuelans rallying for usurper in waiting Guaido, most ordinary ones against him, support for him waning, not increasing.

Addressing the crowd on Saturday, Maduro said "(t)oday as the US empire, in its desperate attempt to take our natural resources, intensified their brutal aggression against the homeland, we firmly stand up to defend our land and scream with force: Yankee Go Home! We are anti-imperialist!"

Venezuelans have celebrated Anti-Imperialist Day annually for the past four years, commemorating Obama's March 9, 2015 executive order, falsely declaring the Bolivarian Republic a threat to US national security - by its good example, what Washington fears will spread to other regional countries.

"We will never forget this, and on every March 9 we will celebrate the day of Bolivarian Anti-Imperialism in Venezuela," said Maduro earlier, adding: "I hereby declare that from 2016 onwards, March 9 will be the Anti-Imperialist Day."

He called for millions of Venezuelans to sign an anti-imperial petition - to be presented at the Union of South American Nations, the Community of Latin American and Caribbean States, the Bolivarian Alliance for the Peoples of Our America and the Non-Aligned Movement.

By mid-April 2015, over 10 millions signatures were gotten, over a third of Venezuela's population - demanding Obama rescind his Big Lie about Venezuela.

Thousands marched to the Presidential Palace to officially present the petition signatures to Maduro. They were audited and verified by Venezuela's National Electoral Committee (CNE), confirming their authenticity.

With Bolivian President Evo Morales by his side, Maduro said the impressive petition drive proves that "the history of the people of Simon Bolivar has been evoked, and it remains awake and alert."

The signatures are maintained in the Bolivarian "historical archive" at the national Public Prosecutor's Office, Maduro adding:

"I receive this mandate…and as the son of the people and as the son of Chavez, I will know how to defend our beloved Venezuela's right to peace, independence and the future. I will take you once more to the victory of peace, which will be our victory."

On Saturday with Maduro at the Presidential Palace, Foreign Minister Jorge Arreaza told the anti-imperial crowd "(t)his is a country that resists and that is why we are going to get out of all difficulties."

"Thousands of opposition supporters marched to central Caracas on Saturday, defying a government ban on rallies in the Venezuelan capital's core and testing a heavy police presence as the country struggled to emerge from its worst blackout in recent memory."

No ban on peaceful rallies exists. Police are deployed to protect Venezuelans from possible violence - not to confront anti-government demonstrators.

The Times failed to explain why the power outage occurred, sabotage causing it, the self-styled newspaper of record saying no evidence proves it, falsely blaming it on "mismanagement and underinvestment" - repeating the official Trump regime Big Lie.

At the same time, the Times once again turned truth on its head, calling Maduro's reelection last May rigged.

Indeed not because it's fake news, an establishment media specialty. Venezuelan hospitals have contingency plans in case of power outages, especially for intensive care and other most vulnerable patients.

The Venezuelan government denied any deaths occurred. So did the head nurse in a large Caracas hospital.

Cardiologist Richard M. Fleming and Others on the Mother of All Public Health Scams

Permanent US Occupation of Afghanistan Planned