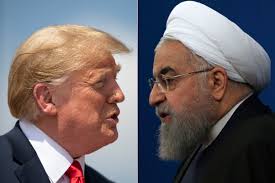 Let's see if I've got this straight. Iran is at peace and engages in mutual cooperation with other countries. It hasn't attacked another nation in centuries, threatening none now.

The US is waging forever wars against multiple sovereign states, threatening others. Republicans and undemocratic Dems, compromising the nation's war party, threaten everyone everywhere.

At the behest of Israel, the US State Department falsely designated Hamas and Hezbollah terrorist organizations. Hezbollah was elected part of Lebanon's government. Hamas is Palestine's legitimate government, not the US/Israeli installed PA.

Longstanding US hostility toward Iran is all about its sovereign independence, its unwillingness to subordinate its sovereignty to US interests, opposition to Washington's war on humanity, along with support for fundamental Palestinian rights.

It lied saying Tehran supports regional terrorist groups, adding "(s)ince 1979, Iran has made it a policy of state to actively direct, facilitate, and carry out terrorist activity globally" – a US, NATO, Israeli specialty, polar opposite how the Islamic Republic operates.

It lied claiming "Iran's development of ballistic missiles…poses a critical threat to regional security." The Islamic Republic's military and legitimate weapons are solely for defense.

The IRGC is involved in preserving and protecting Iran from hostile external or internal attacks and threats, its actions strictly defensive. Its involvement in Syria is advisory, aiding Damascus combat US-supported terrorists.

In February, IRGC second in command General Hossein Salami said Iran's enemies, mainly the US, Israel and Saudis, want the Islamic Republic "to leave (other countries in) the region to clear the way for their dominance and allow them once again to control our borders to be able to create problems for the Iranian nation," adding:

The IRGC constantly alters its strategy and tactics to deal effectively with threats to Iranian sovereignty. "Its enemies should not ask us to leave the region, because they themselves must leave the region," Salami stressed - notably referring to Washington's belligerent presence, mainly in Syria and Iraq.

Iran has no intention of ending its support for Syria, nor working cooperatively with Iraq.

According to the Wall Street Journal, the Trump regime "is preparing to designate Iran's Islamic Revolutionary Guard Corps as a foreign terrorist organization," citing unnamed US officials, adding they're divided on the issue.

The Journal: "The decision, which could be announced as early as Monday following months of deliberation, would mark the first time that (the military) of a foreign state has been officially designated a terrorist entity."

Pompeo and Bolton are behind the move, likely believing it'll boost Netanyahu's reelection chances on April 9, following other Trump regime moves to help him - notably moving the US embassy to Jerusalem and recognizing Syria's Golan as Israeli territory, both actions flagrantly illegal.

Responding to the upcoming move, head of Iran's parliamentary National Security and Foreign Policy Commission  Heshmatollah Falahatpisheh said "(i)f the Revolutionary Guards are placed on America's list of terrorist groups, we will put that country's military on the terror blacklist next to Daesh (ISIS)."

In 2017, IRGC commander Mohammad Ali Jafari warned that if the Trump regime designated the IGRC a terrorist organization, Iran would consider US military forces no different from ISIS.

US and Iranian actions are polar opposite. The Islamic Republic opposes the scourge of terrorism Washington created and supports.

Ahead of Trump's inauguration in January 2017,  joint House/Senate Resolution 10: Authorization of Use of Force Against Iran Resolution was introduced.

Though not adopted, it called for "us(ing) the armed forces of the United States as the president determines necessary and appropriate in order to achieve the goal of preventing Iran from obtaining nuclear weapons" – knowing the Islamic Republic's legitimate nuclear program has no military component.

Time and again, its leadership called for eliminating these weapons. Nothing suggests they intend developing them, nor does any evidence indicate Iran threatens Israel, the US, or any other countries.

Iran remains in full compliance with the JCPOA nuclear agreement the Trump regime illegally abandoned. Unilaterally imposed sanctions on the country are flagrantly illegal, including against its IRGC in 2017, falsely accusing it of supporting terrorism it strongly opposes.

Supporting terrorist groups is a US/NATO/Israeli specialty, not how Iran operates, observing the rule of law Washington and its imperial partners repeatedly flout.