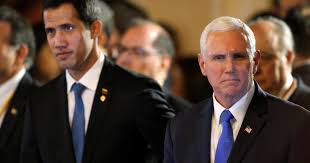 Truth-telling historians one day will explain that Pence and Dick Cheney were the most ruthless US vice presidents in the nation's history, Cheney the most dangerous, both belonging in prison - Thomas Jefferson by far the best, later serving two terms as president.

Pence is an unapologetic evangelical Christian fascist, a neocon hardliner, an imperial war cheerleader, an Islamophobe, Russophobe, Iranophobe, and homophobe - hostile to aliens of the wrong race and ethnicity, along with Muslims from the wrong countries.

Along with Pompeo, Bolton, and Abrams, he's freedom-loving people's worst nightmare - cheerleading wars of aggression, wanting all sovereign independent countries transformed into US vassal states - by brute force if other tactics fail.

In a Friday address, he raged against Venezuelan social democracy - along with other Trump regime hardliners wanting it eliminated.

He lied claiming the US is working "tirelessly to restore democracy and freedom" to the Bolivarian Republic - a notion he and vast majority of others in Washington revile, tolerating it nowhere, especially not at home.

He lied calling Trump "a great champion of liberty for the people of Venezuela…" Polar opposite is true - Trump and extremists surrounding him hostile to what just societies hold dear.

He lied claiming Venezuelans "are rising up" against Maduro. US designate puppet/usurper in waiting Guaido is increasingly reviled.

He sounded buffoon-like saying "(t)he United States is proud to stand with the Venezuelan people (sic)."

"Venezuela is between dictatorship and democracy (sic), but freedom has the momentum (sic). Nicolas Maduro is a dictator (sic) with no legitimate claim to power (sic), and Nicolas Maduro must go (sic)."

Saying the Trump regime was first to recognize Guaido, Pence failed to explain that the US invented and groomed him for usurpation against his country.

He suppressed the fact that three-fourths of world community nations and the UN refuse to recognize Guaido - nor explain that the vast majority of Venezuelans oppose foreign intervention in their country, especially by military force.

Maduro is a popularly elected and reelected social democrat. Pence and other Trump regime officials lied calling him a "dictator (sic)."

Pence lied saying "the average Venezuelan has lost more than 20 pounds through deprivation and malnutrition (sic)."

He lied claiming "thousands of Venezuelan children are starving at this very hour (sic), and thousands of babies in hospitals across Venezuela are dying due to lack of basic medical care and treatment (sic)."

He lied saying millions fled the country, falsely adding millions more to follow before yearend. He lied claiming "more than 70 people are slaughtered every single day."

Independent observers report calm in the country, food market shelves well stocked, government food aid helping the poor, no one starving, no one without essentials to life.

Pence is a pathetic figure. Just societies would imprison him longterm, along with likeminded Trump regime extremists and their congressional co-conspirators.

His address was beginning-to-end bald-faced Big Lies about Maduro, Venezuela, and its hemisphere's best social democracy the US is hellbent to eliminate.

Nothing short of unlikely military intervention is able to work, especially with Russian support for the Bolivarian Republic - key to foiling the Trump regime's coup plot.