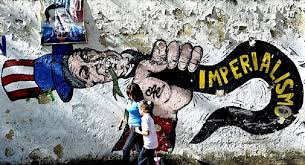 The NYT: Lead Press Agent for the Trump Regime's Coup Plot Against Venezuela

Despite the right wing Wall Street Journal's hostility toward Venezuelan social democracy, the broadsheet has been strangely silent on the country since a March 29 report on the Red Cross, saying it was granted permission to provide humanitarian aid to the country.

On March 25, Journal editors published a three-paragraph editorial call for "Trump…to decide if he is going to let Mr. Putin get away with" Russian involvement in the country (sic), militantly calling it a "provocation…in America's backyard (sic)," invoking acceptable generations-ago outdated rhetoric.

The NYT maintains a near-daily drumbeat of anti-Bolivarian social democracy propaganda, acting as a virtual lead Trump regime press agent for illegally toppling Maduro - its trash some of the worst I've read on any topic, what no responsible editors would touch.

Citing what it called a "possible red-line moment in Venezuela," the Times said Russia "is helping to prop up President Nicolas Maduro…and undermining the hopes of American officials that the (country's) military will oust him," adding:

"The United States has been trying to rally the world behind Juan Guaido, the opposition leader, as Venezuela's legal interim president (sic)."

There's nothing "legal" about coup plotting, about sedition or treason, about betrayal, about serving as an imperial foreign agent against one's country, about inciting violence, about involvement in sabotage - facts the Times suppresses from its readers.

Guaido is an imposter, guilty of all of the above, Maduro Venezuela's legitimate president. Russia is on the side of the angels.

US imperial partners, the Times, and other media scoundrels support the devil - the diabolical Trump regime's coup plot against a sovereign state.

The Times: "Would Venezuela be the place where Mr. Trump, who has often seemed willing to tolerate Mr. Putin's most audacious provocations (sic), finally draws his own red line? And, if so, does he have a plan to enforce it?"

Fact: Brazen US actions against Venezuela are flagrantly illegal. The Times and other supportive establishment media share guilt for supporting the coup plot.

Fact: Russia's involvement in Venezuela is entirely legal. Its plans call for deepening bilateral ties, rejecting Trump regime demands to get out.

The Times is frantic about Russia doing the right thing, foiling US regime change aims in Syria and Venezuela, international law on its side, the broadsheet refused to explain.

What Trump regime officials and the Times calls "Moscow's malign influence around the world" is nonexistent. There's plenty of it from the US virtually everywhere, what media scoundrels suppress.

On Wednesday, Times editors lamented about "narrow(ing)" US options in Venezuela, frantic about Russia's ability to beat Washington at its dirty game in Venezuela and elsewhere.

Its frustration shows in calling democrat Maduro "dictatorial," supporting the Trump regime's coup plot to oust him, backing the treacherous Guaido, furious over his stripped immunity, leaving him vulnerable to arrest and prosecution, his criminality catching up to him.

The Times: "(I)t certainly would be a great relief for Venezuela to be rid of the leader who inherited a broken country (sic) from his revolutionary mentor Hugo Chavez and has continued to push it to utter ruin (sic), creating a humanitarian disaster (sic) atop the world's largest oil reserves."

The Times: "(W)hat was intended as a swift operation to pry out a nasty despot (sic) has turned into a stalemate while Venezuela further disintegrates (sic), lately with long, debilitating blackouts" - caused by Trump regime sabotage the broadsheet suppressed.

The Times: "It is terrible to witness the suffering of a nation for no reason other than the criminal obduracy of a corrupt clique (sic)."

"But the last act in this tragedy can only be performed by the Venezuelans, knowing that the sooner they and their armed forces evict the thieves (sic), the sooner the world will pitch in to help them recover their lives (sic)."

The above rubbish is one of countless examples of what the self-styled newspaper of record calls "all the news that's fit to print."

Is it fit to read? Make your own judgment.