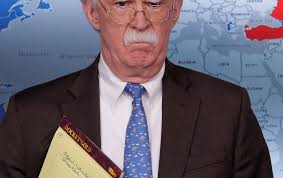 International law is clear and unequivocal. It's automatically US constitutional law under the Supremacy Clause (Article VI, Clause 2) - pertaining to treaties, conventions, and other international agreements to which the US is a signatory.

According to the UN Charter and other international law, no nation may attack another for any reason except in self-defense if attacked or an attack is clearly imminent.

Even then, the Security Council alone may authorize military action by one nation against another - not the US president, Congress or courts.

Venezuela is at peace with its neighbors and all other nations, not at war or threatening any, obviously not the US - a country waging war on humanity at home and abroad.

Hardline Republican and undemocratic Dem regimes represent an unparalleled threat to world peace, its super-weapons, if used, able to destroy planet earth and all its life forms.

No nation in world history caused more harm to more people over a longer duration than the US - a fascist police state seeking dominance over planet earth, its resources, and populations by brute force against sovereign states unwilling to bend to its will.

That's what the scourge of imperialism is all about, Venezuela in the US crosshairs. For over two months, everything thrown at its legitimate government for regime change failed.

Is US military intervention coming? Will Britain, France and other NATO countries join a US "coalition of the willing" to rape and destroy Venezuela?

It's the strategy used in the 1990s rape of Yugoslavia and in all post-9/11 wars of aggression against nations threatening no one.

In my view, it's highly unlikely. The world community opposes it, notably EU, Latin, and Central American nations.

That said, the Trump regime pulled all its staff from Venezuela. A State Department alert advised US citizens in the country to leave.

On Friday, an unnamed Trump regime official said military intervention "is seriously (being) considered as events unfold" - because everything else tried so far failed, adding:

US tactics "continue to diminish due to Maduro's recent actions. These tools are diminishing, which is leaving us with increased economic tools and increased economic pressure…and also a military option, which, as President Trump has said, is on the table."

"The European community, the United States, and the Lima group have made it clear that the consequences of any harm that comes, or an arrest of Juan Guaido, would be devastating to Maduro."

"It would be the worst and last mistake he makes, and, therefore, we are watching very closely."

Trump and other regime hardliners earlier said they're running out of nonmilitary options so belligerent intervention may come next.

Are these and similar comments meaningless bluster, aiming to pressure Venezuela's military to switch sides? What hasn't worked so far won't likely ahead.

Convicted felon Elliott Abrams was appointed point man for regime change in Venezuela. Ugly skeletons in his closet speak for themselves.

Dirty Central American wars he orchestrated in Nicaragua, Honduras and Guatemala were responsible for over 300,000 deaths, countless thousands more brutally tortured, and millions forced into exile.

In June 1986, an International Tribunal on Genocide in Central America called the period a time of intense violence – made in the USA by Abrams and his co-conspirators, saying:

Things "verg(ed) on a near total break-down of the state institutions and open warfare between state governments, competing rebel forces challenging state authorities and indigenous" peoples.

"In the course of resurgent violence, acts of genocide and ethnocide (were) committed against indigenous groups."

Accusations "of state sponsored and rebel force sponsored genocide against indigenous peoples (were) repeatedly made throughout the course of" the decade, including massacres, torture, forced military service, land seizures, arbitrary arrests and imprisonments, population relocations, and attacks amounting to genocide under the UN Convention.

"That there is sufficient evidence to warrant the convening of a (genocide) tribunal goes without question." Perhaps Abrams intends an encore of the above atrocities in Venezuela.

Is he plotting something similar in Venezuela, together with other Trump regime co-conspirators?

Along with more illegal sanctions, proxy and cyberwar war are most likely, the former with armed paramilitary thugs for involvement in violence creating chaos, the latter by attacks on Venezuelan infrastructure.

Direct military intervention would be high-risk, neighboring countries Colombia and Brazil especially hostile to the idea, concerned about possible millions of Venezuelans fleeing cross-border for safety.

Russia appears committed to help preserve and protect Venezuelan sovereignty. If US forces attack the Bolivarian Republic, will Putin intervene against Trump regime aggression similar to how he acted in Syria?

Will the US risk possible East/West confrontation over Venezuela?

In a same day article, I suggested Guaido's arrest, detention, and prosecution for high crimes against the state is likely coming, adding:

Most likely what will follow is escalated US sanctions war, along with more Trump regime threats and establishment media rage. All of the above are coming anyway whether Guaido remains free or detained, awaiting trial - direct US military intervention highly unlikely despite regime threats otherwise.

Venezuela has a choice - going all out to preserve and protect its hemisphere's best social democracy and sovereign independence or become a US vassal state, the country transformed into a fascist police state, its people terrorized into submission.

The choice is simple. Fundamental freedoms are too important to lose. They're worth fighting for, no matter the risks.

Losing them to an imperial power means all hope is lost - which is no choice at all.