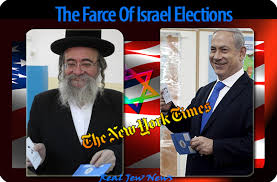 Israeli Arab citizens, 20% of the population, have no say over how they're governed, denied their fundamental rights, treated like subhumans and fifth column threats.

It's much worse for millions of Occupied Palestinians. Disenfranchised under repressive militarized rule, they're ruthlessly persecuted and brutalized. Civil law applies only to Jews.

On April 9, Israelis go to the polls to elect 120 Knesset members from 39 parties. The vast majority of candidates are right-wing extremists, just societies abhorring their agenda.

Choice for Israeli voters amounts to deciding between death by hanging or firing squad, most of the electorate too out of touch to understand, unaware of how their rights eroded, indifferent to persecution of Palestinians, including Arab citizens of the Jewish state.

The process repeats every four years unless the Knesset calls an earlier election by majority vote. The prime minister may also request one early unless majority Knesset members block it - why Tuesday elections are being held earlier than expected.

Parliamentary terms may be extended beyond four years by special majority vote. Israel has no constitution. Under Article 4 of its Basic Law:

"The Knesset shall be elected by general, national, direct, equal, secret and proportional elections, in accordance with the Knesset Elections Law."

Every Israeli citizen 18 or older may vote, including Arabs who are nominally enfranchised, may serve in the parliament, but can't govern or in any way influence policy.

Knesset seats are assigned proportionally to each party's percentage of the total vote. A minimum total is required to win seats.

Jewish parties alone are empowered. As powerless as potted plants, Arab parliamentarians have no decision-making authority.

They're also constrained by the 1992 Law of Political Parties and section 7A(1) of the Basic Law that prohibit candidates from denying "the existence of the State of Israel as the state of the Jewish people" exclusively.

Under the law for Arabs and Jews, no candidate may challenge Israel's fundamental Jewish character or demand equal rights, privileges, and justice.

The essential Zionist identity is inviolable. The law works only for Jews, notably privileged ones. Israeli Arabs have no rights.

They're denied equal treatment and justice, even those elected to public office. Israel calls this "democracy." South Africa called it apartheid. Nazi Germany called it fascism."

Coalitions are required to govern. So single party ever won a ruling majority of seats throughout Israeli history.

In 2015, Netanyahu's Likud party won 30 seats, a 25% minority. Other parties agreeing to become coalition partners gave him enough seats for a ruling majority.

Results should be known some hours after polling stations close on Tuesday at 10PM. Netanyahu will either be reelected for another term or be replaced by Gantz.

No matter which way it goes, Israelis will end up losers, its Arab citizens and Occupied Palestinians harmed most of all.