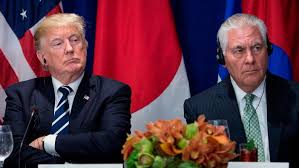 Rex Tillerson Was Right About Trump

Replacing Tillerson with neocon extremist Pompeo smoothed things for waging war on Iran and Venezuela by other means, along with escalating hot wars in multiple theaters - raging endlessly with no prospects for resolution.

"(H)e doesn't like to read, doesn't read briefing reports, doesn't like to get into the details of a lot of things. But rather just kind of says, '(l)ook, this is what I believe and you can try to convince me otherwise,' but most of the time you're not going to do that."

Separately, he ripped DLT, saying he "speaks for himself," indicating a sour relationship, calling him a "f…ing moron," a remark he never denied.

Countless examples proved him right. Judge for yourself by his latest remark following Netanyahu's likely reelection as Israeli prime minister, a day of mourning for peace-loving people everywhere, saying:

"I'd like to congratulate Bibi Netanyahu. It looks like that race has been won by him. It may be a little early but I'm hearing he's won it and won it in good fashion," adding:

Fact: The half-century-long no-peace/peace process is the greatest hoax in modern times, along with the US global war OF terror, not on it.

Fact: Trump and Netanyahu are unapologetic warlords, partnering in each other's wars of aggression - guilty of high crimes of war, against humanity and genocide.

They're hostile to the fundamental rights of ordinary people everywhere, notably to Palestinian, Syrian and other victims of aggressive wars they wage.

Domestically, Trump disdains the rights of Black Americans, unwanted aliens, and Muslims from the wrong countries.

Tillerson was right about DLT, calling him a "moron." He and Netanyahu are unindicted war criminals, belonging in prison, not high office.

Regimes they head wage endless wars on humanity, their partnership representing pure evil. Americans have to put up with Trump for nearly two more years.

Israelis may fare better if Netanyahu is prosecuted, convicted and imprisoned for bribery, fraud and breach of trust - ending his political career and freedom while behind bars.

It can't happen a moment too soon!

Not so! Far and away it's Netanyahu, ruthlessly persecuting Palestinians, an entire population held hostage to his viciousness, the same true for earlier Israeli regimes under warlord leaders.

Trump is more contemptuous of Palestinian rights and one-sided for Israel than any previous US president - practically bragging about it, why Israeli Arabs, Occupied Palestinians, and the Arab street revile him.

So do people everywhere for peace, equity and justice, fundamental principles he and hardliners surrounding him revile.