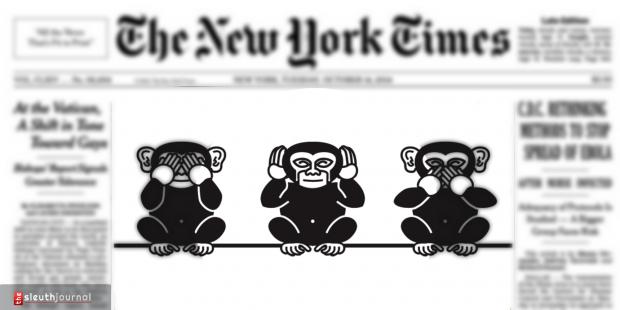 The self-styled newspaper of record never met a US war of aggression, color revolution, or old-fashioned coup it didn't wholeheartedly endorse and cheerlead - ignoring UN Charter principles, other international law, and the US Constitution, forbidding aggression under its Supremacy Clause (Article VI, Clause 2).

" 'You Shouldn't Be Here:' US Pushes UN to Pull Venezuela Envoy's Credentials."

Fact: Nicolas Maduro is Venezuela's democratically elected and reelected president, Samuel Moncada his legitimate UN envoy - what the whole world knows, including the Trump regime, the NYT, and other establishment media.

The Times: Pence told Moncada: "You shouldn't be here. You should return to Venezuela and tell Nicolas Maduro that his time is up. It's time for him to go."

Instead of denouncing the above remarks, the Times supports them, calling imposter Guaido Venezuela's "rightful interim president" - his self-declaration scripted in Washington, flagrantly violating the Bolivarian Constitution and international law.

The Times: "In February, the United States and Russia introduced dueling resolutions on Venezuela at the Security Council. The American proposal called for free and fair elections (sic), and the Russian plan backed Mr. Maduro's government. Both failed."

Fact: Russia acted responsibly, recognizing Maduro's democratic reelection, affirmed by international monitors, calling the process open, free and fair - polar opposite the US money-controlled process, ordinary people having no say over how they're governed, increasingly repressively.

The Times: "Mr. Pence said he felt that 'momentum is on the side of freedom.' "

The Trump regime's coup plot failed, short of unlikely direct US military intervention. All bets are off if its hardliners go this far.

In response to Pence's Security Council rage, Maduro denounced his "arrogan(ce), adding: He  made "a fool of himself at the UN Security Council" on the world stage, representing Washington's ugly imperial agenda.

"They are violating our sovereignty principles, and forcing the international world to take its approach. This is a crucial moment for the world. This moment will define towards which side the balance is going to tilt, towards unipolarity or multipolarity."

On Tuesday, a State Department official called repressive regimes Pompeo is visiting "excellent models (sic) of the kind of transition (sic) that Venezuela can achieve (sic)" - falsely adding these nations are examples of "the region's commitment to democratic values (sic)."

Calling Venezuela, Nicaragua, Cuba, and nations supporting them "malign actors," he failed to explain Trump regime desperation for its failed coup plot against the Bolivarian Republic.

Does Pompeo intend pressuring nations he's visiting to go along with escalated US tactics against Venezuela?

Does he have military intervention in mind, a strategy regional countries and the world community strongly oppose.

The Trump regime didn't launch war on Venezuela by other means to quit. Defeating it has miles to go.

It's why Russian support is vital to preserve and protect Bolivarian social democracy, what's too precious to lose.