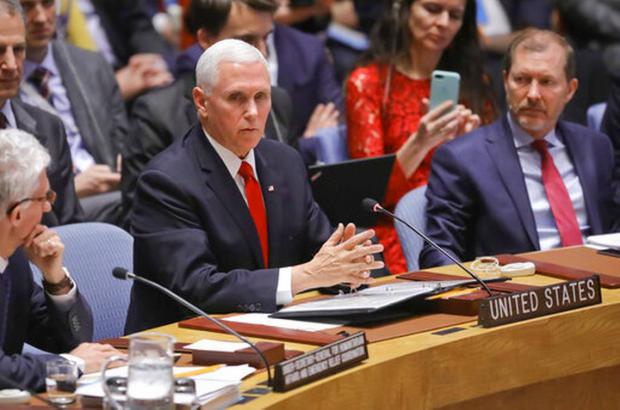 US imperial arrogance was front and center Wednesday at the Security Council as it is whenever the self-styled indispensable nation tries to force its will on other nations.

The latest to Security Council members on Wednesday repeated his litany of bald-faced Big Lies days earlier, ranting in desperation for a lost cause.

The vast majority of Venezuelans want US dirty hands off their country. They, regional countries, the world community, and UN oppose military intervention against the Bolivarian Republic.

The Obama regime's 2014 coup d'etat in Ukraine was the most brazen one in Europe since Mussolini's 1922 march on Rome.

It showed on Wednesday, pretending imperial America supports "democracy and the rule of law." No nation flouts it more egregiously worldwide time and again than the US.

No nation poses a greater threat to everyone everywhere. None in history caused more harm to more people over a longer duration - dating from the 18th century, today with super-weapons able to destroy life on earth.

The US is a totalitarian plutocracy, oligarchy and kleptocracy, not a democracy - inventing enemies, smashing one sovereign state threatening no one after another.

A nation permanently at war to expand and preserve its empire is doomed to lose it like all others in history, its hubris and arrogance bringing it down, along with ruinous military spending at the expense of vital homeland needs.

Defying fundamental UN Charter principles, Pence turned them on its head, citing the world body's "responsibility for the maintenance of international peace and security" - notions the US repeatedly flouts unaccountably.

He lied comparing Bolivarian social democracy to Nazi Germany - the comparison relevant to how the US operates, not Venezuela under Chavez and Maduro.

He lied claiming Venezuelans suffer "under the heavy hand of oppression" - again how the US and its imperial partners operate, not the Bolivarian Republic.

Ignoring US sanctions war on the country causing serious economic harm, he lied saying "(t)housands of Venezuelan children are starving…Infants in hospitals across Venezuela are dying for lack of basic medical care."

He lied claiming Maduro "use(s) violence and intimidation against anyone who opposes" him. He lied saying he's "a threat to peace and security of the wider region…"

He lied claiming Venezuelans "are subject to crime, violence, and lawlessness" - only by US enlisted paramilitary thugs, not the government.

Activist Venezuelan collectives (aka collectivos) are world's apart from how he and establishment media portray them. They're social organizations involved in defending Bolivarian social democracy.

They have nothing to do with involvement in street violence, engaged in by US-supported gangs of hooligans, armed or otherwise.

Pence turned truth on its head them, calling them "(v)icious gangs (that) turned the streets into warzones." The rest of his rage against Venezuelan social democracy the way it should be repeated more lies featured by his regime and supportive media.

In response, Venezuelan UN envoy Samuel Moncada slammed him, calling invented humanitarian crisis conditions in the country "part of the machinery of lies spread about (its) government," rejecting Pence's call for the world body to recognize imposter Guaido as interim president, adding:

"(W)e do not accept any racist, supremacist doctrine that they want to impose over us. We are not anybody's subordinates, much less of the imperialist government of Trump and his representative Pence."

"The first point of this discussion, the battle inside the UN, is to defeat the imperialist arrogance of this man…(W)e clearly established how there is a (US) program for economic destruction…being applied with no pause."

Russia's UN envoy Vassily Nebenzia began his address, saying he intended to take as much time as he wished to set the record straight on Venezuela, including on how the Trump regime is going all-out to topple its legitimate government.

He slammed US imperial arrogance, saying "(t)oday we watch just another act in a multi-act drama that attempts to change" democratically elected Bolivarian governance adding:

Pence turned truth on its head claiming Venezuelans "suffer under an 'illegitimate dictator.' " Nebenzia asked SC members when they last visited the country to observe things firsthand on the ground, stressing:

"We reject point blank the US methods for Venezuela. One hand of yours holds Venezuela 'by the throat,' introducing renewed (illegal) sanctions and limitations that impede the country's normal development…"

"The other hand 'picks the pockets' of Venezuelans by shamelessly expropriating their assets in Western banks."

"Since the beginning of this year alone you have seized over $30 billion of Venezuela's funds and proclaimed that only impostor J.Guaido can manage" them.

"The overall damage caused by the US to Venezuela's economy since 2013 is estimated to be hundreds of billion of US dollars."

And yet the Trump regime is "the loudest voice among those who urge to help the people of Venezuela" - while going all-out to harm them.

"There have been many instances of the US blatantly interfering in the internal affairs of Latin American countries (and elsewhere worldwide to) toppl(e) unwanted leaders and (governments) by military force."

"The solution to the provoked crisis in Venezuela can only be achieved by an internal Venezuelan dialogue" - free from foreign interference.

"What is going on in the Security Council today…is another attack against official Caracas and ordinary Venezuelans…blatantly violat(ing)…the basic principles of the UN Charter…a bandit action."

Nebenzia touched the right nerves. At the same time, he made a futile request for the Trump regime "to recognize…the right of Venezuelans and of other nations to be masters of their fate" - knowing Republicans and undemocratic Dems don't operate this way anywhere.

Pence's anti-Venezuela address was an exercise in imperial hubris and arrogance - effectively countered by its UN envoy Mondada and Russia's Nebenzia.

The session achieved nothing to resolve weeks of failed US efforts to topple Maduro, eliminate Venezuela's social democracy, and gain another imperial trophy.

The whole world knows what's going on, what the scourge of imperialism is all about, its aims essential to defeat in Venezuela and everywhere else.