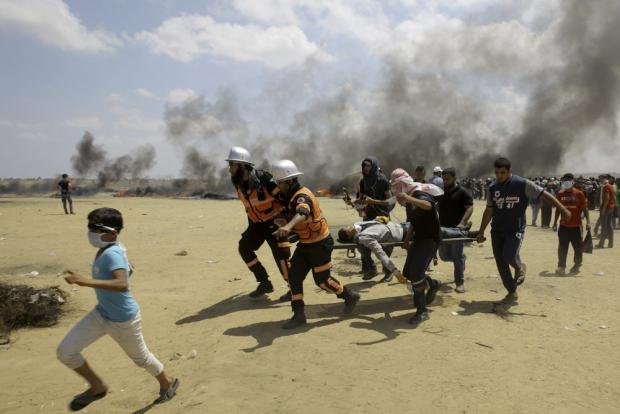 Palestinians Blamed for US/Israeli Crimes Against Them

Hamas is Palestine's democratically elected government, not the US/Israeli created PA, what came out of the disgraceful 1993 Oslo Accords, a Palestinian Versailles.

Illegitimate puppet Mahmoud Abbas serves as enforcer against his own people for special benefits received.

Netanyahu vowed not one inch of Israeli occupied territory will be given back. Trump regime ideological extremists support his ruthlessness, including state terror and aggression.

Two million Gazans are terrorized under suffocating blockade, falsely blamed for misery inflicted on them, the world community largely ignoring their suffering.

In a NYT op-ed no responsible editors would touch, he falsely blamed Hamas for Israeli high crimes of war and against humanity on the Strip.

He mocked the suffering of its people, blaming them for US/Israeli inflicted misery. He lied claiming Israeli Arab citizens "live normal lives (sic), and in many cases, thrive (sic)." Reality is polar opposite.

He lied saying much the same about West Bank Palestinians, an entire population terrorized by US/Israeli viciousness.

He lied claiming the Trump regime "tried helping Palestinians" - by cutting off aid, illegally recognizing Jerusalem as Israel's exclusive capital, and partnering with Jewish state high crimes against them.

He lied accusing Hamas of "profess(ing) violence and the destruction of Israel as a method of gaining a better life for Palestinians" - blaming an oppressed people and their leadership, not their oppressors.

He lied claiming Hamas "instigated three wars with Israel since 2007," the Jewish state in cahoots with the US responsible for three wars of aggression since December 2008.

Greenblatt ignored virtual Israeli war on the Strip, over 250 Gazans killed, more than 26,000 others injured since March 30, 2018.

Israel's unilaterally declared land and sea buffer zones prohibit access by Gazans to their own land and territorial waters.

The land zone puts up to 1,500 meters from Israel's border off-limits. The nautical zone excludes fishing from beyond three to nine miles at various times.

Given the frequency of Israeli attacks on Gazan fishermen, they're threatened in permitted areas, including fishermen attacked for the crime of fishing, farmers attacked in their fields for farming, and young children at play - no one threatening Israeli soldiers or civilians.

"Enforcing the 'buffer zone" through the use of live fire which has often led to direct targeting of civilians, is a war crime, where killings under these circumstances constitute a willful killing in grave violation of the Geneva Conventions of 1949."

After Trump's election in November 2016, he tweeted: "After Brexit, after Trump, a world is collapsing."

Separately he said "(t)he role of the United States as a policeman of the world, it's over."

Trump's no-peace/peace plan is at least 99% what Israel wants, Oslo 2.0, continued Palestinian subjugation, self-determination the way it should be off the table, according to Araud.

They have two choices - surrender unconditionally to Israeli demands or be pushed with greater toughness.